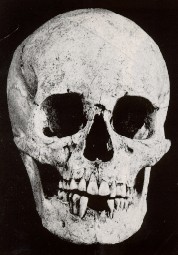 As we have seen from other recent articles, it is important to look at changes in environment when addressing changes in population and culture in the past. A re-examination of environmental trends from the medieval period revealed that volcanic eruptions caused changes in weather patterns in England. The increased cloud cover caused by the eruption led to poor agriculture, and therefore increased susceptibility to disease and famine. Another study looked at decreased rainfall and the correlation to changes in funerary rituals. With drier weather it is thought that mummification increased in Chile and Peru. A new study by Kusaka et al (2012) seeks to address similar types of changes by looking at migration during a period of population increase in Japan due to improving weather conditions.

The study aims to test two hypotheses: first, that there was an increase in immigrants to Japan from the middle to late Jomon period (5000-4000 BP to 4000-2300 BP), and second that ritual tooth ablation is a feature that can be used to distinguish immigrants from locals. Analysis of climate in this region has revealed a warming period from 7000-4000 BP, followed by a cooling period from 4000 to 1500 BP. During the warming era there was an increase in large settlements based on archaeology and a focus on marine and faunal resources based on isotope analysis. However, in the cooling period these large settlements were disbanded, and an increase in caries prevalence shows a changing focus on plant resources. It is this period of increased immigration that they wish to examine through ritual tooth ablation patterns and strontium isotope analysis. 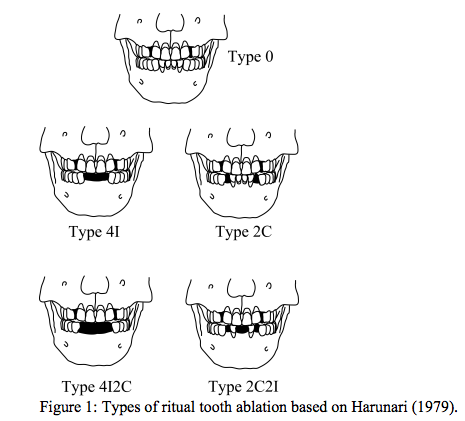 Types of Tooth Ablation in Jomon Period, via Harunari 1979

Strontium isotope analysis revealed that only one individual from the Ota site was an outlier and all individuals from the Tsukumo site were within the same distribution. This means of the entire sample only one individual was identified as a potential immigrant based on isotopic analysis. Based on these results, the authors argue that either people weren’t moving as much as previously thought or they were moving to areas with similar strontium isotope signatures. If populations from the coast remained in these areas or moved only along the coast it would be difficult to determine migration from their strontium ratios. Comparing types of ritual tooth ablation with strontium isotope levels shows that there is no clear correlation between the ritual and migration. The site contained a number of individuals with type 4I tooth ablation, which was proposed by Harunari (1979) to be a sign of an immigrant, however these had the same strontium ratios as the types of ablation thought to be associated with locals.

Based on their analysis, Kusaka et al (2012) argue that there isn’t a correlation between ritual tooth ablation and immigration, and that movement of people in this region during the Jomon period needs to be re-assessed. Previous studies have argued the migration increased throughout Japan, but Kusaka et al (2012) posit that it may be restricted to movement in specific regions and not in the region they studied. Further investigation is needed. It is an interesting study, and I like that they looked at migration from both a physical and cultural perspective. What defines someone as an immigrant or as having a different ethnic background isn’t always something that can be physically determined- often we need the artifacts and cultural associations to really understand identity.