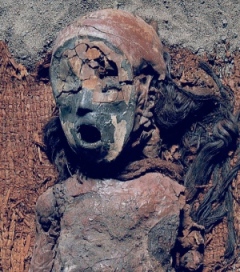 A 4,500-year-old Chinchorro mummy. Via Nature and B. Arriaza

Last week I posted on the recent discovery that a mass burial from medieval London can actually be attributed to a volcano rather than plague. I discussed the importance of looking at the environment when trying to interpret mortuary sites. This week, another publication has noted the importance of environment when assessing mortuary practices in the past. However, this article takes it one step further. Rather than detrimental changes in the environment directly causing death by famine and disease, it argues that a beneficial change in climate led to a population boom and a shift in burial practices. Following the publication in PNAS, the article by Marquet et al. (2012) has been widely discussed by a variety of news sources. These distilled versions of the original article, while informative and interesting, have left many questions to be answered about this tie between environment and burial. What I want to do here is break down the original argument by Marquet et al. (2012) in order to see how they logically proceed using their evidence.

The goal of the study by Marquet et al. (2012) is to examine the emergence of artificial mummification among the Chinchorro of the Atacama Desert in Northern Chile and Southern Peru. They pose a number of questions regarding the practice of mummification among this hunter-gatherer group: 1) what led this group to develop this cultural complexity 2) why is the complexity manifested in an elaborate cult of the dead 3) why does the mummification take on several distinct forms 4) why does the practice exist only between 7.5 and 4.4 thousand years ago? Based on recent models of technological and cultural evolution, they hypothesize that the complexity in the Chinchorro was brought about by an increase in population size driven by beneficial changes in the environment that led to increased resources, which in turn led to increased innovation and accelerated cultural evolution. They also argue that this particular innovation, artificial mummification, manifested due to the same environmental change that created a hyperarid climate.

The evidence used to examine these hypotheses includes prehistoric environmental conditions, estimations of population sizes, and archaeological evidence of mortuary practices. Using geological and hydrological surveys of the area they are able to determine that there was increased rainfall from 7.8 to 6.7 thousand years ago, and using ice cores from the Andes suggests that the weather was more stable during this period. Based on 460 Chinchorro archaeological sites and the years of occupation they are able to estimate population size in this area. Their calculations show that the period between 7 and 4 thousand years ago was a period of growth and high population density. There is a dramatic spike at 7 thousand years followed by a sharp decline around 4.8 thousand years ago. The question is then why these conditions lead to changes in mortuary practices.

Chinchorro mummies. Via Past Horizons and Manuel alarcÃ³n (Flickr, used under a CC BY-NC-ND)

Marquet et al. (2012) argue that complexity manifested in mortuary practices due to the hyperarid environment of the Atacama Desert. They note that little to no decomposition occurs in the desert, so overtime it is possible that the accumulation of the deceased became a major presence in the landscape. Chinchorro deceased prior to 7 thousand years ago primarily were placed in shallow graves in the desert. It is highly likely that wind, erosion and human activity would expose the burials, causing continued visual interaction with the dead. Using Hertz’s argument that decay of the body corresponds with beliefs about the fate of the soul, it is possible that natural mummification was seen as the appropriate method of disposal and with increasing complexity became an artificial practice. As the population increased there was increased technological and cultural innovation. One of these innovations was elaboration of a mortuary process that had previously occurred naturally. It isn’t known whether the practice was limited to specific groups or correlated with some internal social complexity.

The argument is quite intriguing and is well supported by the evidence. The fact that the increase in artificial mummification correlates with the increased rainfall and increasingly stable weather is an important relationship to examine. However, the link between them is somewhat tenuous and needs to be further developed. While the logic can be followed, it is based on postulation that the environmental change caused mortuary change, rather than just correlating with it. Further examination of the broader cultural changes and population movement of the region is needed. This is a great article and has a well thought out argument, and it will be very interesting to see how it develops as further evidence is introduced.

Other Discussions of This Work

Past Horizons. Why the Chinchorro Suddenly Began to Mummify their Dead: http://www.pasthorizonspr.com/index.php/archives/08/2012/why-the-chinchorro-suddenly-began-to-mummify-their-dead