When looking at archaeological sites there is a tendency to forget that the environment we are excavating in was not often the environment that the site was created in. My work for Campus Archaeology proves this time and times again as we excavate the modern Michigan State University Campus and consistently find sites which don’t make sense in the current environment. We’ve found prehistoric river sites located not near the river, and river rocks and mud found in the center of a green space. However, historic maps and photos reveal that the green space in the center of campus actually was the site of a large lake and river that were filled in when the campus first started. However, its more than just thinking about location- we also need to consider the general weather patterns and environmental changes that may have been occurring when the site under investigation is being researched. 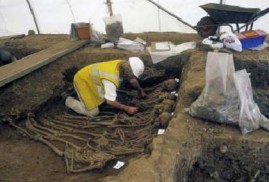 Excavation of mass burial, via Museum of London Archaeology

Archaeologists in London have been examining a mass burial that was recovered during the 1990’s and thought to date to the early 14th century. The initial explanation attributed the mass grave to the Black Plague which swept through London in this period, or the Great Famine from 1314-1317. However, radiocarbon dating has placed the site at the mid-13th century, and related geological data shows that it may be due to a massive environmental shift caused by a volcanic eruption. Geologists studying the eruption determined that it would have been the most catastrophic one in the past 10,000 years. The size of the gas and ash plume would have released a fog that would have blocked out sunlight, altered the atmospheric circulation patterns and drastically cooled the Earth’s surface by 4 degrees centigrade. This means decline in crops, famine, rise in rickets, and death.

A passage from a London monk in 1258 reads: “The north wind prevailed for several months… scarcely a small rare flower or shooting germ appeared, whence the hope of harvest was uncertain… Innumerable multitudes of poor people died, and their bodies were found lying all about swollen from want… Nor did those who had homes dare to harbour the sick and dying, for fear of infection… The pestilence was immense – insufferable; it attacked the poor particularly. In London alone 15,000 of the poor perished; in England and elsewhere thousands died.”

Research into the global environment is extremely important, and can drastically shift our interpretations for why certain events occurred in the past or why archaeological sites look the way that they do. Geologists studying changes broad temperature fluctuations and environmental change are actually suggesting that the volcanic eruptions that caused the mass deaths in the mid-13th cenutry may also have precipitated the Little Ice Age (See the full article on this argument here). My own research into the rise in rickets prevalence during the 16th century is related to this Little Ice Age. Mostly rickets was known as a disease of industrialization, caused by children being forced to work long hours in dark factories. However, this spike in prevalence pre-dates the Industrial Revolution. My own research into the period revealed not only major shifts in the urban environment, but major shifts in the natural environment like those experiences in the mid-13th century.

The rise in rickets coincided with two widespread natural events: the Little Ice Age and the Maunder Minimum. From the mid-15th century to the mid-19th century the European climate became more unpredictable, and shifted to a cooler weather pattern due to a phase of glacier expansion. This phase is known as the “Little Ice Age”, and its coldest segment occurred from 1680 to 1730. Comparison of yearly weather patterns with the trends in the London Bills of Mortality shows that the worst winters, and years where the Thames froze over, coincide with the highest peaks in rickets mortality. When sunlight was available, the ability to form vitamin D was dependent on accessibility to ultraviolet radiation. Between 1645 and 1730, there was a lack of sun spots known as the “Maunder Minimum”. The amount of ultraviolet that occurs on a yearly basis is dependent upon solar activity, which has a direct relationship with the number of sun spots; the lack of sun spots meant no UVB and no vitamin D synthesis (Read the full post on rickets in the 17th century here).

Looking at context is pivotal to making interpretations from archaeological sites. This includes both the specific and broad cultural and natural contexts. Events like volcanic eruptions have the power to drastically change our lives. Think about the eruption in Iceland that occurred in 2010 that stopped numerous flights and created ash clouds across Northern Europe. Now times that by 10,000 and you can begin to imagine the change experienced in the mid-13th century. A full report about how these geological changes will affect the interpretation of the archaeological site in London will be released next week, and hopefully will show the effect that this volcano had on the medieval peoples.

3 responses to “The Importance of Environmental Context”