In the United States, historically we chose to bury our dead with our family and community. People would buy large plots within cemeteries where they could bury their relatives over time and maintain their family connections. My first ever GIS analysis of a cemetery involved one that was focused around the family. These plots consist of an area of grass marked off with stone or metal to show the extent of the space, and have a large marker at the center of the area that would have the family’s last name along with perhaps the name of the first few members to be buried there. Around this central marker would be the headstones of the other family members, often spouses and children were buried in lines next to one another, and they may only have their first name, dates and their status marked on the small stone (like Mother, Daughter, etc.). This is happening less frequently now- families are spread across the landscape, and the physically location of the dead doesn’t seem to hold as much weight with the living. This idea of maintaining the community and family connection even in death has fascinated me. Increasingly, we’re learning that it isn’t just our ancestors that wanted to remain together in death- this is a sentiment that transcends time and space. 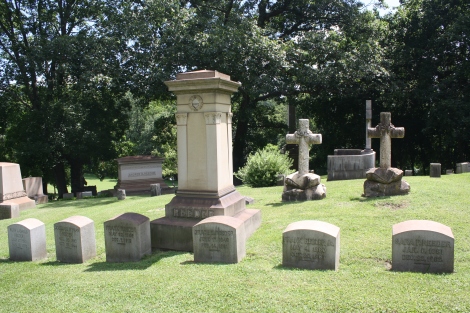 Reeder Plot- example of a family cemetery plot from Pennsylvania, via Wikimedia

A new study by Alt et al. (2016) uses a wide range of anthropological and scientific techniques to examine a mass burial from Spain. The tomb dates to the Late Neolithic period (4000-3000 BCE), a period of great change due to the introduction of agriculture. Farmers were cultivating wheat, barley, peas, lentils, beans, flax, and poppy, demonstrating a large knowledge about the farming process. Agriculture also caused a shift from a nomadic to sedentary lifestyle, with groups forming small communities around their farms to protect the resources they were cultivating. Along with these technological and social changes, came a shift in burial practices. Megalithic tombs become popular- large blocks of stone and earth were used to create large visible structures to store and commemorate the dead over a long period of time. Study of the individuals who were buried in these tombs has the potentially to tell us about how these funerary structures were being used, how these communities dealt with the broader changes occurring in this period, and what life was like during the early stages of agriculture.

Alt et al. (2016) use an integrative approach combining a variety of methods in order to better interpret the individuals who were buried in one of these Late Neolithic megalithic tombs, found at Alto de Reinoso. They used the human remains to determine age, sex, trauma, stress, disease, and activity patterns. Additionally, took samples of mtDNA in order to determine biological relationships between the individuals, and conducted stable isotope analysis using strontium, carbon and nitrogen to determine whether they migrated and what their diet consisted of. Combining these three methods together, they are able to really create a nuanced interpretation of who these people are.

The megalithic tomb contained a high density of human remains found in two layers: 1) disarticulated and disturbed human bones including groupings of skulls and long bones that may have been intentionally arranged, and 2) primary burials below that had not been disturbed and included 12 individuals. Within the tomb there was also a small amount of grave goods including personal jewelry like beads and tusks, as well as some stone axes and blades. The deposits date from 3770 to 3539, indicating that the tomb was likely used over the course of 80 years or three generations of individuals. 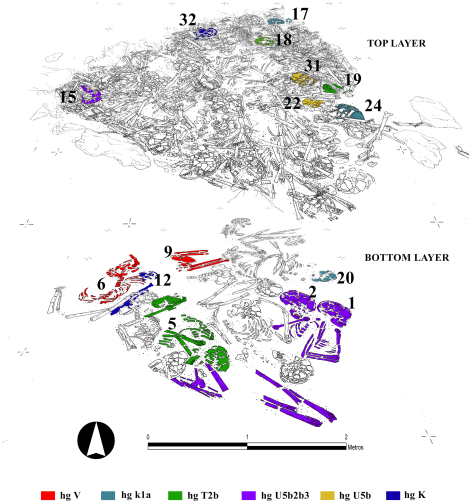 The minimum number of individuals from the tomb is 47, although they were only able to identify skulls for 21 adults and 17 subadults. 11 individuals were identified as male and 12 as female. Paleopathological evidence was typical for a Neolithic farming population- a number of individuals showed degeneration in the spine due to labor, there were four different fractures found, and one example of blunt force trauma to the skull. Seven individuals showed signs of non-specific stress, possibly related to disease or malnutrition. Of the total sample, 14.5% showed signs of tooth decay. DNA analysis revealed that more than half of the individuals share genetic characteristics with other individuals in the tomb, and all individuals likely came from around Spain or Portugal. Based on carbon and nitrogen isotopes, they determined that these individuals had a mixed diet of farmed grains and animal proteins.

Based on this evidence, Alt et al. (2016) argue that the megalithic tomb was used by a small farming community consisting of close family members who lived and died within the same area. The community was egalitarian, meaning that there were no strong differences between individuals based on status, age or sex. Their burial together in a single tomb demonstrates and maintains the close bond that they had in life. The purposeful arrangement of skeletal material in the upper layers shows a close relationship to the deceased and their ancestors, and the tomb may have been a way of maintaining relationships among the living. This is a really fascinating combination of different methods, and the range of evidence really strengthens their argument. Personally, I’d like to hear a little more on the funerary behavior and why the skulls may have been removed and altered in the tomb… but perhaps I’ll just have to wait for the next paper.