The Atlantic slave trade was a massive and horrific undertaking promoted by Europeans between the 16th and 19th centuries to forcibly move people from Africa to America to be sold as laborers. During this period in America, there was a desperate need for cheap labor, and the demand led to at least 12 million people being taken from Africa to large plantations in the Caribbean and South America. Before major trading with the Americas began, the earliest slave plantations were located in Madeira, the Canary Islands, and the Cape Verde, islands on the central-eastern side of the Atlantic Ocean that harvested sugar cane. The Canary Islands in particular were an important part of the Atlantic trade networks, acting as a primary exporter of sugar cane and a hub for trade between Europe, Africa and America. The Canary Islands, however, lacked a large native population for labor, causing wealthy investors to seek cheap or unpaid laborers from Europe and Africa. By investigating the burials of these enslaved individuals, we can learn more about who they were, what they suffered through, and how they negotiated their new status.

A new article by Santana et al. (2016) investigates the Finca Clavijo cemetery, a newly discovered set of burials dating from the 15th and 17th centuries. The cemetery is located in the northern part of Gran Canaria, an area that was dedicated to sugar cane production, and was found in an old sugar cane ﬁeld, an unusual location for burial and located far from the places where individuals were usually inhumed in this period. Finca Clavijo was discovered during construction, but the complete cemetery could not be excavated due to the limits of the building works. In total, they located seven burials with eight individuals that were in their primary burial context, and six individuals that were displaced during construction.

Santana et al. (2016) use DNA, stable isotopes, skeletal markers of physical activity, and the burial methods in order to understand who these individuals were, and what their relationship to the slave trade was. The sample has a minimum number of 14 individuals, including three young adult females, one older adult female, one middle adult male, three sub-adults, and five that could not be determined. All individuals were buried on their sides, with their heads slightly raised, with legs extended or slightly flexed, and there were no clear patterns for placement of the arms. All skeletons were oriented West to East, a traditionally Christian practice of facing the rising sun. Grave goods include glass beads from bracelets, earrings, a medal, a coin, a shoelace, and a circular fragment of metal. Additionally, there were fragments of sugar molds found in other archaeological levels of the site.

DNA analysis showed that people buried at Finca Clavijo came from a variety of different genetic groups, including Northwest Africa, Sub-Saharan Africa and one individual who was likely a Canarian aboriginal descendant. Stable isotope analysis showed that two of the 14 individuals were not born in the Canary Islands, and likely were raised in Africa. The skeletal markers of physical activity support that all of these individuals had hard working lives, and were likely involved in the harvesting and processing of sugar cane. There was significant stress placed on the spine, arms and legs, and the patterns of wear indicate that they were doing highly repetitive motions. Osteoarthritis, Schmorl’s nodes and herniated discs are common among enslaved populations, and have been recorded for other enslaved peoples in South Caroline, Waterloo and Barbados. 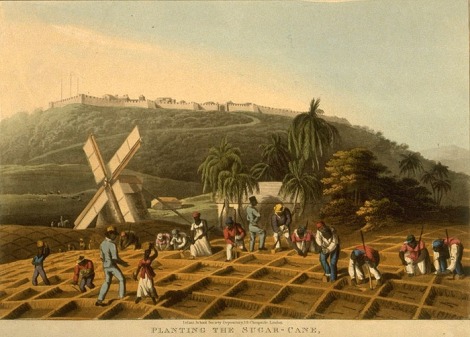 Planting of Sugar Cane in Jamaica, William Clark from 1823 which depicts
slave planting sugarcane on a plantation. Via Douglas et al. 2005

What makes this cemetery unique, it that it doesn’t have the same burial patterns as other cemeteries from this region, and suggests that these individuals had a different social status. When individuals are excluded from the primary Christian or Catholic cemetery, as these individuals are, it usually indicates that something offensive occurred or that they comprised a minority that wasn’t covered by civil and ecclesiastical law. This is not just due to their status as slaves, since laws in Spain during this period required that masters Christianize their slaves. Further, one of the individuals had a religious medal, featuring Saint Francis of Assisi on one side, and the Immaculate Conception on the other. Santana et al. (2016) argue that perhaps this cemetery represents a multi-ethnic group that included a blend of religious beliefs, such as  Catholic, Islamic, and African. They propose that the cemetery represents a single syncretic funerary tradition- meaning that they blended together the beliefs and rituals of Catholic, Islamic and African traditions to fit their community. It is possible that they chose to bury their dead in this unique way and location as a sign of resistance against their masters and as a way to reinforce their hybridized identities.