Since I’m currently in the process of preparing to defend my dissertation (yay!), I’m going to be re-posting some of my favorite past articles! Recently, Caitlin Doughty of “Ask a Mortician” infamy, posted a video blog on coffin birth, which led to increased internet interest in the topic. Coffin birth is a bizarre possibility for archaeologists that we do need to be aware of. However, we still don’t know if there is really any evidence that this happens, and it is really difficult, if not impossible to prove it. Four years later, I sadly do not have more answers about this phenomenon. So enjoy this repost, and wish me luck on my defense!

I was reading through an article yesterday from the International Journal of Osteoarchaeology titled “The Non-Adult Cohort from Le Morne Cemetery, Mauritius: A Snap Shot of Early Life and Death after Abolition” by Appleby et al. (2012) when I stumbled upon a new term: coffin birth. I guess it seems obvious now what it means, but at first glance my thought was: why on earth would a woman want to give birth in a coffin? It had me thinking about the episode of The Office where Dwight discusses how their family funerals are happy celebrations of life, but marriages occur in a grave and are a solemn affair. However, coffin birth is what it sounds like- the occurrence of a fetus being birthed by the mother after her death.When I started researching the term more closely I discovered that this was actually fairly uncommon in the past, and we are still unsure whether this is something that can actually happen!

Coffin birth in academia is known as postmortem fetal extrusion. It is the expulsion of a non-viable fetus from a deceased pregnant female during putrefaction. During decomposition, the human body will create natural gases due to the breakdown of the body which creates swelling. The confined gases in the abdomen can cause squeezing of the uterus, forcing the fetus out of the body. Since it occurs through the vaginal opening, it appears to mimic the process of birth- ergo the more colloquial term. The process isn’t well understood since it doesn’t occur in all cases of pregnant female death and it rarely occurs in modern society. Chemical preservation of the body removes the natural body fluids and bacteria that cause putrefaction and swelling, which makes the occurrence of coffin birth nearly impossible. There are very few recorded modern examples, however at least two pregnant women found days after their death in 2008 showed either the early stages of postmortem fetal extrusion or had already expelled the fetus. Beyond these there is little forensics evidence.

However, medical records from the 16th through 18th century and recorded cases in bioarchaeology do provide some evidence of this occurring. From historical records, we have a number of documented cases- though their reliability isn’t known. From the 17th century, a parish register notes “April ye 20, 1650, was buried Emme, the wife of Thomas Toplace, who was found delivered of a child after she had lain two hours in the grave”. Historical records by Bonet describe a woman, who died during pregnancy in Brussels in 1633. Three days later the dead fetus was found “hanging between the thighs”. Other occurrences are noted by doctors and historians: “Richter of Weissenfels, in 1861, reported the case of a woman who died in convulsions, and sixty hours after death an eight months’ fetus came away. Stapedius writes to a friend of a fetus being found dead between the thighs of a woman who expired suddenly of an acute disease. Schenk mentions that of a woman, dying at 5 P.M., a child having two front teeth was born at 3 A.M. Veslingius tells of a woman dying of epilepsy on June 6, 1630, from whose body, two days later, issued a child. Wolfius relates the case of a woman dying in labor in 1677. Abdominal movements being seen six hours after death, Cesarean section was suggested, but its performance was delayed, and eighteen hours after a child was spontaneously born” (Gould and Pyle 1981). 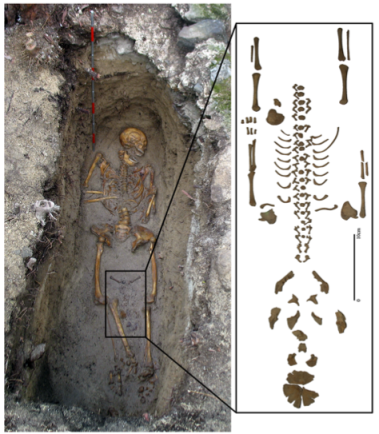 In bioarchaeology, identification of this process can be difficult due to skeletonization. Presence of a fetus with a female is not enough since the two may be put together even if they died within a short time period of one another. The location of the two sets of remains and the positioning is important to recognize. Lewis (2007) argues that identification of coffin birth requires that the fetal remains are complete and in a position inferior to and in line with the pelvic outlet. The head of the fetus should be oriented opposite to that of the mother. Aging of the subadult is also important to determine if it was young enough to be a neonate rather than just a young infant. In the article by Appleby et al. (2012) a neonate skeleton aged 33-35 weeks of gestation was found in this position. Due to this evidence, they argue that this is a case of coffin birth.  While the site dates to the 1830’s, when chemical preservation was increasing in use- the deceased population was primarily slaves or freed slaves who may not have had the funds to preserve their dead or may not have wanted this type of process. Other examples of coffin birth in bioarchaeology have been discovered, showing that this occurred throughout history.

While the process is not a common one, postmortem fetal extrusion is a possible occurrence we need to be aware of as archaeologists. It isn’t rare to find adult females buried with neonatal or infant remains, but we need to be careful of how we interpret the spatial relationship between the two bodies. If they are side by side it may represent a successful birth followed by death of both, if the neonate is in the fetal position with the female’s body cavity it may be death of a pregnant women, and if the fetus is within the thighs facing the mother it may be coffin birth. Regardless, noting the relationship between the remains is important.

Gould and Pyle. 1981. Anomalies and Curiosities of Medicine. http://www.worldwideschool.org/library/books/tech/medicine/AnomaliesandCuriositiesofMedicine/chap3.html