Human remains are powerful statements. They can be a symbol of violence, veneration, respect, disrespect, memory, or art. As archaeologists, we need to be careful about the ways that we display human remains since they do carry so much weight. Artists like Francois Roberts have used human bones as a way to make artistic statements about violence and the human condition. The bodies of major political figures like Lenin or Zedong have remained on display since their death as a way to support their political views and continue their legacy. Human remains may be displayed for educational purposes as well- places like the Mutter Museum were started as a way to share medical collections so that students could learn more about human bodies and pathologies. In order to understand why human remains would go unburied and be put on display, we need to look carefully at both the broader and local context of display.

Skulls from the Mutter Museum, photo by Flickr user istolethetv

A new study by Nelson and Martin (2015) examines disarticulated human remains from the prehispanic Northern Frontier of Mesoamerica in order to better understand the social and political processes during this period. The Epiclassic period (600–900 CE) in this region was a time of social and demographic change due to the collapse of Teotihuacan, a massive social and political center. Replacing this major power were new small polities made up of varying ethnic groups that interacted in diverse ways, including warfare, violence, suppression, hybridization and co-existence.  (1–3). Styles of architecture, costume, and iconography merged across old boundaries. One of these was La Quemada, a small polity that likely dealt with interethnic violence, as evidenced by the defensive structures and deposits of human skeletal material.

The human skeletal remains from La Quemada include a large deposit of disarticulated bone found in the Hall of Columns, and a second large disarticulated bone assemblage found at the foot of a small pyramid. Individual burials were discovered beneath the floor of the main ball court and in a pyramid. Prior analysis of these deposits and burials have focused on two primary interpretations: 1) residents kept human remains in living spaces as a sign of respect for the ancestors, or 2) they represent violent encounters with enemies, possibly of different ethnic groups. It is also possible that it was a combination of these interpretations. These patterns of mortuary deposits occur in other contemporary sites including Alta Vista, where disarticulated bone was found hung in a temple, and at Cerro del Huistle where skulls hung on racks in the main plaza. It is this question about the meaning of these varying deposits of human bone that Nelson and Martin (2015) seek to address.

Nelson and Martin (2015) examine the disarticulated remains from La Quemada based on their locations within and outside structures. Within a temple, there were three piles of human remains that were likely originally suspended from the ceiling in bundles, and fell into piles when the rope decayed. 20% of the bones showed evidence of cut marks indicative of dismembering and defleshing, although the shallow depth of marks also shows that this occurred long after death when the flesh was already desiccated. Bones comes from both males and females, and represent all age groups. They propose that the three different bundles represent three different episodes of dismemberment, with community members being processed and bundled as they died over a period of years. The argument that this was an enemy is rejected based on two reasons: 1) the bone was modified after death, and 2) the bone was placed in a visible location within a temple and is more consistent with ancestor worship. Other remains found indoors include a few primary burials that show no signs of defleshing or processing. 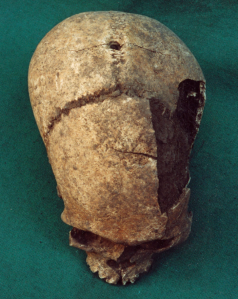 Skull with drilled hole for hanging, from Nelson and Martin (2015)

Outside of the temple on a ball court or patio area, disarticulated human remains were also found and may have been displayed or deposited here. These bones also show signs of cut marks, however these are deep cuts that likely indicate they were made around the time of death. A portion found on the patio also show signs of pot-polish, an indicator of being boiled for consumption. A portion of these outdoor displays of human remains included a possible tzompantli, a skull rack. Unlike the indoor displays which include all skeletal elements, these outdoor deposits only include skulls and long bones. Two drilled crania were found among these outdoor deposits, and may have been hung up. Other fragments of bone were found near house patios and in middens (trash deposits). The majority of these bones found outdoor show evidence of perimortem processing (cut marks, fractures, and burning), and they are primarily from adult males and females.

Nelson and Martin (2015) conclude that there were six different contexts of human skeletal remains: 1) three indoor clusters of human remains in the temple with shallow cut marks, suggesting defleshing after some period of postmortem desiccation and decay that suggests ancestor veneration, 2) bone fragments found outdoors on a patio suggesting possible location of cannibalism, 3) skulls and long bones suggesting a public display of defeated enemies, potentially on a skull rack, 4) trash deposits of processed fragments of human remains representing discarded bones, 5) other fragmented bones found discarded throughout the public spaces, and 6) rare individual inhumations that were placed in tombs.

The question was whether  1) residents kept human remains in living spaces as a sign of respect for the ancestors, or 2) they represent violent encounters with enemies, possibly of different ethnic groups. The answer is both. The remains of ancestors were processed after death and were kept indoors in temples as a sign of respect and veneration. Enemies were processed around the time of death and their remains could be broken, eaten, defleshed, displayed, and discarded around the complex.

If you have the time, I highly suggest you also read the article by Nelson and Martin (2015), which can be found open access here. It is a nuanced and careful study of the ways that remains are treated differently at a single site. In order to better interpret what was occurring in this period following the rise of these small polities and interethnic violence, we need to look carefully at how this is occurring at local sites.

3 responses to “Human Remains on Display in Prehispanic Northwest Mexico”