This week, I’m attending the Cultural Landscapes and Heritage Values conference at UMass Amherst. I am going to be speaking Thursday at the 8-10 am session, “Universities as Examples of Cultural Heritage Planning, Understanding Landscapes, and Being Sustainable”, sponsored by the Society for American Archaeology. Based on the title, you can probably figure out that I’m not talking about death- I’m talking about authenticity and historic landscapes. You can read the abstracts and details on the MSU Campus Archaeology Program blog here. But thinking about historic landscapes at MSU has gotten me thinking about death and landscapes.

We know that there are important reasons to look at layout and space within cemeteries- but does it matter where the dead are buried on the landscape? Well, there are a lot of both practical concerns for where the dead are located, as well as emotional, political, religious and social reasons.

There are some very pragmatic reasons that we should be concerned about where people are buried. A recent article from Northern Ireland discusses the problems with burying the deceased on hills (O’Doherty 2015). They found that formaldehyde that was used to preserve the dead in recent burials has been leaking into the ground, and when these burials are located on hills, the chemicals can drain down into bogs and rivers. Due to this, cemeteries are being reclassified as a toxic site on the landscape. Some of the older cemeteries in Northern Ireland even used arsenic as a preservative. A very practical concern here is how close cemeteries are located to water tables and whether these toxins from decomposing bodies will leech into the drinking water or damage the environment. This is a major reason that we should be thinking about where we bury our dead.

This isn’t a new concern- when it comes down to it, a dead body is a dead body that will decay whether it is a personal relation or roadkill. Concern for hygiene during the Roman Empire led to laws forbidding burial within the city walls except in certain cases such as the death of a newborn or Vestal virgin (Retief and Cilliers 2006). Death was considered to be a form of pollution- efficient burial and disposal was important to the Romans, especially in large cities packed with people. The reverse of this is Paris. Paris is also a large city, and has been for centuries, but unlike the Romans, they allowed burial within the city walls.

Historic art of the creation of Paris’ catacombs, via Daily Hop

During the reign of Louis XV, city inspectors recorded various account about the unsanitary conditions of Paris’ cemeteries. The Parisians wanted to be buried in their city, but the cemeteries were full- leading to overuse, incomplete decomposition of bodies, and unhygienic conditions. Decades later, in the reign of Louis XVI, the bones from the cemeteries were moved into the unused mines below the city, and now makeup the Paris Catacombs. Even though the bones were moved, they still remain in Paris- so this was a practical and social decision (see the full post on the catacombs and other deathly decorated locations).

In the other hand, there are more emotional, religious, spiritual, and political concerns about where the deceased are placed in the landscape. For example, the landscape of death changed dramatically with the introduction of Christianity. In 5th to 7th century CE England, cemeteries were often placed around Bronze and Roman earthworks and monuments, with the burials of the culturally Anglo-Saxon peoples around and within them. This creates a landscapes of ancestors, both the real ones and the imagined ones from ancient monuments (Williams 1997). However, as Christianity became more popular, it was important to bury the dead in consecrated ground. This leads to a major shift in the landscape of the dead, from placement in formal cemeteries near earthworks and communities, to a requirement to bury within the church burial grounds (consecrated ground), and exclusion from these grounds being a sign of sin, crime, or social deviance.

Goldstein’s (1995) analysis of the location of Mississippian mounds in the United States revealed that these burial sites tended to cluster around specific landscape features. She argued that mortuary landscapes are very important to interpreting life and death: “When the spatial dimension is extrapolated to an even broader scale—that of mortuary sites against the landscape—the interaction of settlement, mortuary practices, and land use in general can be examined.” Her analysis revealed that animal shaped mounds tend to occur near habitation sites, and cluster near resources, with a preference for wetlands and river confluences. Since there is no burial differentiation, it is likely that group identity was important, and that the mounds are ancestral markers on the landscape. By placing these burials in certain locations, they are reasserting their identity. 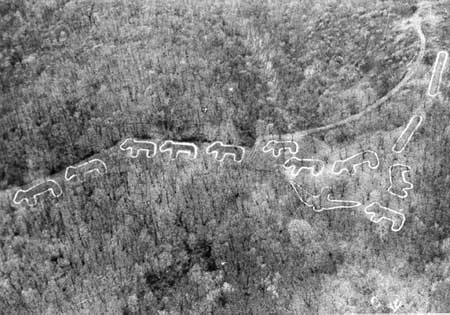 Studies of Neolithic passage graves in Sweden have shown that the landscapes in this period were divided between landscapes of death and life. A passage grave is a megalithic grave that is built using large boulders. These are shaped into a burial chamber with a shaft leading in and they are often covered with an earthen mound. Settlements are primarily found in low-lying areas, whereas passage graves are located in higher limestone ridges and are constructed in a way that are similar to natural mountains. Von Hackwitz & Lindholm (2015) argue that the landscape was specifically set up in this manner to create a relationship between the living and dead. From various viewpoints on the landscapes, the passage burials would be highly visible, however the settlements would not be. Those living in this area during the Neolithic period would have recognized the strong connection to ancestors who were visible and watched over them.

2 responses to “Death and Landscapes: Why Does Location Matter?”