This is not meant to be taken as a statement of fact or truth, rather it is a humorous exercise in using osteological knowledge to examine a current debate. With that, let’s begin.

Personally, I like the historic version of Father Christmas where he wears a long green or purple coat, goat may be included, via Wikimedia

If you’ve been listening to the news recently, you know there has been major debate about whether we should introduce Santas of different ethnicities. It began because a blogger, Aisha Harris, wrote an article for Slate arguing that Santa should no longer be a white male. She describes her childhood experience with Santa as bewildering because he was one skin color at home and another everywhere else, which caused her to feel some sense of insecurity and shame. Harris proposes we introduce a penguin Santa, no racial designations there. This led to a Fox News program where the ethnicity of Santa was discussed, and led to a now infamous statement by Megyn Kelly that “For all you kids watching at home, Santa just is white“. Following this timely remark, The Daily Show gave a phenomenal critique of the so called debate and broke down some of the larger issues at work.

While current politics are interesting, this whole issue has me thinking about the osteological and archaeological side. In the Daily Show, Stewart brings up the fact that the individual who Santa is based on is St. Nicholas, who was a Greek (though the region now is Turkey). He even shows images of what the face of St. Nicholas would have looked like based on facial reconstruction from his skeletal remains. St. Nick looks decidedly greek- which makes sense. So this is all good then, they found St. Nick’s bones, they did facial reconstruction, and he isn’t white.

This is where the mortuary archaeology comes in… we are going to discuss first the bones of St. Nicholas, and then second (tomorrow’s post) discuss what the bones of Santa would really look like if we found them (again, this is meant to be humorous, Santa is still alive and well according to the NORAD Santa tracker).

Saint Nicholas was alive from March 15, 270 CE to December 6, 343. He is also known as Nikolaos of Myra and Nikolaos the Wondermaker. Many miracles are attributed to him, and he had a reputation for gift-giving. He was born a Greek in what is now modern day Turkey, and was the son of wealthy Christian parents. He was a staunch defender of Orthodox Christianity during a period of divisions and debates. His tomb in Myra was a popular location for pilgrimages. Due to warring in the 11th century, his tomb was moved to Bari, Italy. However, there are a number of locations that claim to have relics of St. Nicholas including churches in Venice, Austria, Belarus, Belgium, Bulgaria, Canada, Denmark, France, Germany, Greece, Netherlands, Romania, Russia, Scotland, Switzerland, Ukraine, and the USA (there’s a church in Troy, MI that I should probably visit now as a field trip to see potential Santa bones…). In total, 48 churches claim to have parts of his remains. Photos from the tomb in Bari show that they have almost a complete skeleton, including all the smaller foot and hand bones. The relic trade during the Middle Ages is infamous; since the bones of saints were in such high demand, many of the relics were fakes stolen from human or animal graves. While the skeleton from Bari was reconstructed and fits the general age and demographic of St. Nicholas, it is highly likely that these are just the bones of a random individual. Perhaps his real bones are in Flushing, NY? That is the first problem with this, that we assume the relics are truthful. But lets say that they are… 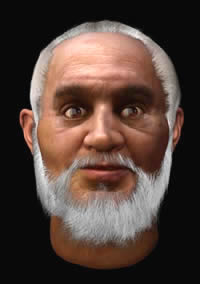 The description of the removal and analysis of St. Nicholas’ bones showed that the tomb was filled with 3/4 inch of water and that the bones were not well preserved. They even noticed that a slice of bone was removed from a vertebrae, potentially to take a relic, however this could have appeared for a number of reasons and it would have been nice to see pictures of the incision. They remains were examined in the mid-20th century, and then reburied. They concluded that they belonged to a single individual who was around 70-75 years old, he was 5’5″, and had a slightly elongated head. He had a vegetarian diet based on his teeth. His face had a broad forehead, large eye sockets, and a medium nasal cavity. He had evidence of chronic arthritis of the spine and pelvis, and thickening of the skull which would have caused chronic head pain, he also had a broken nose. The facial reconstruction revealed a genial looking man with darker skin and a big white beard. This is the second problem, there are no scientific reports for St. Nicholas, the descriptions of the remains are not specific enough for outsider assessment, and the reconstruction definitely took an approach that prioritized his ‘Santa’ identity. Facial reconstruction is an art and science. The final details of eye color, hair color, skin color, and any fleshy related attributes cannot be determined from the bone alone, and the artist needs to be fairly objective when doing the reconstruction.

Are these actually his remains? Maybe. Is the facial reconstruction accurate? Potentially. Does this answer the question, is Santa white? Not at all. This just tells us that the individual who Santa was potentially based off of was of Greek descent and perhaps had the ability to grow a white beard.

Tomorrow, we explore what Santa’s bones would look like if we were to examine his remains…

Most of what was written comes from the St. Nicholas Center’s website. You can watch video about the reconstruction and bones at there site and learn about the legend. Below are the pages I directly cited.

10 responses to “The Santa Issue I- Who is St. Nicholas?”