Osteoporosis is an increasingly important issue in modern Western health, and is a serious problem for many older individuals. Bone loss is clearly associated with age and sex, most notably found among women over 50. Osteoporosis does have a multifactorial causes, therefore in order to understand the root cause of the disease it is important to examine other factors than just the drop in estrogen levels caused by menopause. Other factors include diet, hormones, physical activity and reproductive history. 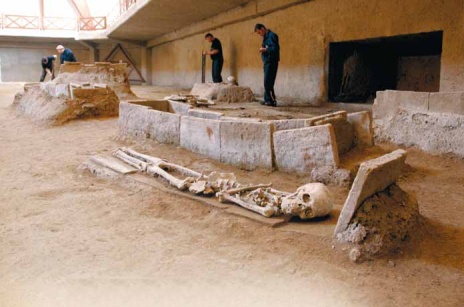 Bioarchaeological studies have looked at patterns of osteoporosis in the past; sometimes these patterns do not conform to the modern studies. For example, bone loss has been found in young age with very low fracture rates for both men and women in the past, the opposite of modern populations. The reasons for differences between modern and ancient populations is potentially due to problems of sampling. While modern populations can have perfect samples drawing from a range of classes, ages and sexes, the samples we have from ancient populations aren’t necessarily representative. However, beyond problems with modern techniques and sampling, there are factors in the past which we need to consider. The environment, diet and living conditions of ancient populations may have different effects on the way that they were affected by osteoporosis and who was affected by the disease.

While there is a wealth of information about the history, environment, lifestyle and behavior based on textual and archaeological evidence in the Roman period, there is very little research being done on biology and disease based on the actual skeletal remains (Bondioli and Macchiarelli 1999). Previous studies of Roman populations in the UK (3rd-4th c. CE) found that women have more severe age-related bone loss than modern women (Mays 2006). However, since men were not included it is unclear whether there were sex related differences. Although a study done on the Isola Sacra population (1st-3rd c. CE) found the patterns in cortical bone loss were similar to modern populations (Cho and Stout 2011). Beauchesne and Agarwal (2012) examine cortical bone loss in ancient Velia in Italy (1st-3rd c. CE) and compare the results against archaeological and modern populations.

The sample comes from a necropolis at Velia which was in use primarily during the 1st and 2nd c. CE. The people at Velia were agriculturalists, although the city is primarily known for being a port. Fishing and commerce were a major part of life, although the diet was primarily cereal and meat based. 71 individuals were selected to be sampled, including 32 females and 39 males, with 13 young adults, 35 middle age adults, and 23 old age adults. In order to test cortical bones loss, the researchers used metacarpal radiogrammetry, which has been proved to be an effective indicator of osteoporosis. The technique is non-destructive and doesn’t require any calibration, meaning its results can be compared between populations without potential method issues. Cortical bone loss was calculated and compared by age and sex on the second metacarpal. Beauchesne and Agarwal (2012) found that “age and sex-related patterns of bone maintenance and loss at Velia generally follow modern population trends”.

The results of the study were compared with those from UK Roman populations and modern. The overall cortical bone loss is slightly higher in ancient populations, but there aren’t the sex differences that are found in modern populations. The overall increased bone loss in the past is primarily due to the improper nutrition in the past. One important difference that can explain the variation in cortical bone loss in women in the past and present is the difference in reproductive strategies. Women in Rome reached menarche at a much later age than modern women (about 3-4 years later) and were likely to keep having children until their 30’s or 40’s, unlike modern women who usual stop in their 30’s.  Roman women also breastfeed about a year or year and a half longer than modern women. The high number of children Roman women had and the longer breastfeeding decreased the prevalence of osteoporosis.

The most important find by Beauchesne and Agarwal (2012) is that there are “no sex differences in metacarpal cortical bone loss… in the oldest age group for the Velia population [which] is important as it continues to challenge the a priori expectation that women in past populations are bound to age-related bone loss and fragility”. This potentially due to the reproductive and health differences in the past. While ancient populations had worse nutrition, they were more active which protected against osteoporosis. The study didn’t do a very thorough analysis of different Roman or historic samples in order to show differences with modern populations. In order to fully understand trends of osteoporosis we need to have a wide range of samples done in different eras and regions. As stated before, doing studies on ancient populations can be problematic because the sample isn’t necessarily representative. This study is a good first step in showing the importance of doing cortical analyses. Hopefully this will lead to more studies to do more complete studies.