Recently, the popular news has been fascinated with the discovery of an upright burial from a Mesolithic cemetery site in Germany. Rightly so! Upright burials are an extremely rare phenomenon, and incredibly interesting. However, these articles don’t really get into the nitty gritty details and the evidence surrounding the burial. Today, on Bones Don’t Lie, we’re going to dig a little deeper into the journal article behind this news, critically examine the evidence, and look at some more modern examples of upright burials (Whaaaaaaaat?! That’s right, I said modern examples).

In 1962, a number of human bones were found in Brandenburg, Germany dating to the Mesolithic period (6,500 to 6,300 BCE), including a double burial of a female adult and a child with numerous grave goods. In 2012, Terberger et al. (2015) went back to the site to excavate the remaining burials. As the excavation continued, they found a number of scattered human bone and artifacts, but nothing overly substantial- that is, until they excavated a large dark brown and black soil feature that appeared to be a hearth or fire pit at first.

At a depth of 0.75 m below ground in this dark burnt soil feature they found two connected human vertebrae, with a human rib and skull beneath them in sandy soil. As they continued excavated deeper, they discovered part of the spine in anatomical order, as well as mixed skeletal elements such as the arm bones, ribs and pelvis. Within these mixed bones were a number of grave goods. Based on the mixing of these bones with the fire pit on top, they proposed that it may represent a secondary burial, whereby the individual is buried, and then excavated and their bones are used in some other type of ritual or funerary act. 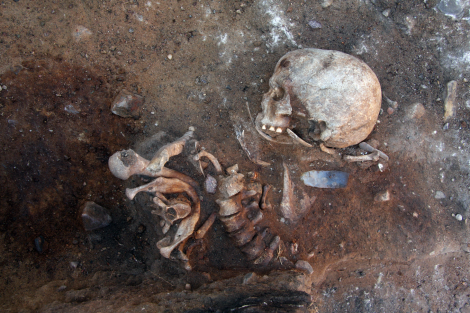 Photo of the upright burial during excavation, shows the mixed bones and parts of the spine in anatomical position. (photo: A. Kotula, via Terberger et al. 2015)

However, as they continued digging, they found that all of the bones located anatomically beneath the pelvis were still in their correct order, with legs and feet in a vertical position. This led to a re-interpretation of the evidence. Instead, they propose that the individual, following their death, was placed into a vertical shaft like pit and was propped up into a standing/slanting position. In order to maintain this upright position, the shaft was filled with sand to the knees. Based on the presence of gnaw marks and animal tooth marks, it is believed that the remainder of the grave was left open and subject to carnivore scavenging. This would explain why half the body is in anatomical upright position, and the other half is mixed. Additionally, as the body decomposed, the upper half would end up collapsing into the rest of the pit. Eventually, it may have been filled with sand and used for a fire pit as a final act to its use.

The skeleton belongs to a male, aged between 24 to 27 years, who didn’t have any strong indicators of a physically difficult lifestyle. The grave goods found include 30 flint artifacts and two bone tools that may include an awl and be related to leather working. Based on these objects and the lack of physical strain, the individual may have been a craftsman or flint knapper. Based on Carbon 14 dating, it was determined that this individual died around 5,000 years age, which means that he dates to a much later period than the other Mesolithic burials found at the site.

Upright burial is unusual, and we really don’t know the exact reason that this individual was placed in this position. It is likely that this was part of a very specific ritual with a specific purpose- what that was we do not know. But what about other examples of upright burial? While there are some other prehistoric examples, they are still unusual and little is known about why they occurred. However, upright burials is something that is discussed by modern funerary and governmental organizations. 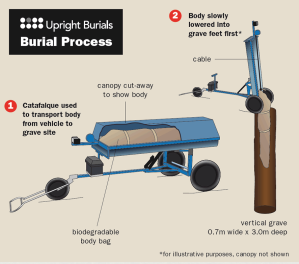 A company in Australia, Upright Burials, has the goal to make the funerary process simpler and give mourners more control over the burial. In 2006, they were able to purchase a cemetery, and developed technology to aid in doing these upright burials. Although the goal was a simpler and cheaper burial that wasn’t clouded with funeral industry determined standards, it is also a space saving method. Many cemeteries around cities are overflowing with burials, and available land is becoming scarce in some areas. Upright burial may be seen as a necessity in some places in the future. This is the only group that talking about using upright burials- there are dozens of modern discussions about how to save space and whether upright burial could be a solution. So perhaps into the future, we will see more upright burials along with the push for greener and more options for a personalized send-off.

3 responses to “Upright Burial: A Mesolithic and Modern Phenomenon?”