When I was doing my masters in Edinburgh, Scotland, I started a blog called Bones Abroad so that my family could follow along with my travels and I could keep them up to date on what I was doing. I’ve decided to start a section on this blog with the same name to report on good osteological and mortuary things to do while traveling.

In 79 CE, a year before the colosseum was finished,Mount Vesuvius erupted, destroying both the city of Pompeii and Herculaneum. At Herculaneum there were very few human remains found, and it was assumed by archaeologists that the inhabitants were able to flee. However, in the 1980’s, almost 300 skeletons were found on the nearby beach, perhaps attempting to flee into the ships that archaeologists found sunken near the shore. The presence of only bones suggests that the people suffered through a pyroclastic blast from the volcano, burning off their skin and killing them almost instantly. Red staining found on the insides of the skulls confirms this theory; with the inhabitants dying a thermal shock, the heat literally melted their brains.

At Pompeii, the remains are not bones, but rather casts of bodies made from volcanic ash. The pyroclastic surge that killed the inhabitants of Herculaneum in an instant was not as kind to the people of Pompeii. They were hit by painful hot and lethal gases, that slowly killed them as they tried to flee. Pumice and ash fell from the sky. Once the combination hit anything wet, including their internal organs as they inhaled the combination, it turned into a cement. As they slowly died from the gases or ash, they were covered with pumice and ash; a rainfall shortly after causes the bodies to become cemented into human sculptures. While the flesh of the preserved people at Pompeii would have decayed, the cement sarcophagi from the ash preserved the outline of their form in which they died in.

In 1777 CE, the first skeleton from Pompeii was discovered, a young woman whose sex was known not because of osteological analysis, but because of the imprint left in the ash by her body. In 1863, it as realized by archaeologists that they could pour plaster into the hollows formed by the flesh to create casts that showed the form of the person but also kept the skeleton intact. The process was so successful that it continues to be used on site, although newer clear plasters made of glass fibers are being used to allow for artifacts and jewelry, as well as the state of the bones to be seen more clearly.

The bodies of Pompeii reveal something unique in archaeology- the actual moment of death preserved. Each of the bodies tells a unique story about an individual and how they suffered at the end. The Garden of Fugitives contains the bodies of 13 individuals who are suspected to have died the morning after the first eruption. Archaeologists have inferred that these bodies make up three families, the parents found clutching their children, and one body making a last effort to rise out of the concrete ash to save the others.

A small child was found underneath a staircase, clutching a Venus deity for support (Venus was the patron saint of Pompeii). The ash that covered him was so fine that every fold in his clothing and even his eyelids were preserved. One victim found near almost 100 others was clutching a wooden box filled with surgical tools, potentially a doctor on his way to save those who were already injured. At an inn, a younger woman was found covered with golden finery and a Roman bracelet that said “from the master to his slave”.

While visiting Italy, I was able to visit Pompeii. While the site itself doesn’t contain the majority of remains discussed in books, it is still impressive to wander a massive city that was completely deserted. Unlike many ruins which have been stripped of their materials, the general architecture of Pompeii remains intact. Towards the Porta Marina entrance you do get the opportunity to see the casts of four individuals: one who is crouched into a ball, another lying on his back who likely died in his sleep, a pregnant woman who was running away and collapsed onto her belly, and a dog who was attempting to run but couldn’t because he was chained to a doorway. Getting to see how the people lived, and then seeing the actual forms of the people is incredible. It helps brings Pompeii to life. While the site became a large mortuary structure, it was still for many years a living city so its important for us to understand the whole site and not just dwell on the bodies. Personally, I’m impressed by all the archaeology that is continuing to go on at the site, and the amount of work that has gone into protecting and preserving it for the past 200 years. 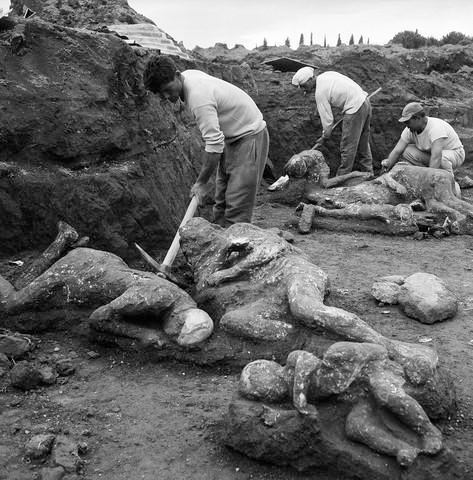 For those of you in the States who are more interested in the bodies than the entire site, you can go to an exhibit that is currently in NYC which displays copies of the bodies and tells their stories. If anyone has gone please let me know if its worth it!