When people ask me why archaeology is important, or why I’ve chosen to study human remains and funerary practices, I often cite the importance of bringing individual stories back into history. As a kid, I was always intrigued by history and loved to learn more about the past. However, I often lacked historical individuals that I could look up to, and was disappointed that the best historical stories were based around the successes of rich men. Archaeology offered a way to study the lives of the average person, to learn more about what women were doing in the past, to understand what childhood may have been life, to know what people of different ethnic backgrounds were experiencing, and how all these individuals survived. History is getting better at finding and sharing these lost narratives- I often turn to the Stuff You Missed in History Class for new tales of incredible women to inspire me as I complete my Ph.D. But bioarchaeology plays an important role in restoring these lost tales because it is the only way you can actually examine the people themselves and not just the remnants of their behavior.

A new article by Gleize et al. (2016) is doing just that- it is restoring the story of a people whose early history in Europe is not as well documented. The expansion of the Arab Empire during the early Middle Ages represents one of the largest political and religious changes in history, and led to the formation of one of the most important empire. During the 8th century, the Arab Empire invaded from Northern Africa and conquered the Iberian Peninsula, spreading across this region as well as southern France. Their conquest led to dramatic changes in culture and religion due to the Muslim traditions of the empire. This occupation of Spain and Portugal is fairly well documented both in text and archaeological sources between the 8th to 15th centuries. However, their presence in Southern France is not as well documented, and it is unknown whether the sparse evidence of Islamic coins and ceramics found in France during this period represents trade, travel or conquest. 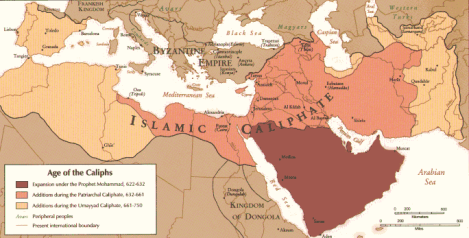 In 2006, three Muslim style burials were discovered at an early Middle Ages cemetery in Nimes, France, and allowed archaeologists the opportunity to learn more about this lost narrative. Gleize et al. (2016) take a multidisciplinary approach in order to properly interpret these burials that combines archaeological analysis of the funerary practices, osteological analysis to determine their biological identities, and paleogenomic techniques to determine their biological ancestry. The three graves under investigation present characteristics that are not common to early medieval France, but that correspond to Muslim practices. Each body was wrapped in some type of material with arms and legs extended, and placed directly in the grave on their right hand side facing southeast- the direction toward Mecca. These styles of burial are more commonly found in Spain, Portugal and Silicy, all of which were regions occupied by Muslim communities in this period. The three burials were found within a larger cemetery and were not isolated. Radiocarbon dating confirmed that the burials dated between the 7th and 8th centuries CE. The earliest textual evidence for Muslims in France is dated to the 13th, suggesting that this archaeological evidence is now the earliest.

Skeletal analysis revealed that all three individuals were adult males. There was no evidence for cause of death or any traumatic marks on the bones to support that they were warriors or engaged in fighting. One of the skeletons has an incomplete fusion of two bones in the hand- a unique skeletal trait that is found mainly in African populations. Mitochondrial DNA taken from the three individuals confirms that they had maternal genetic ties to Northern Africa, and were associated with genetic groups that spread across Europe during the Muslim expansion in the middle ages.

Based on the archaeological and genetic evidence, Gleize et al. (2016) propose that these three individual were likely Northern African Berbers that had been integrated into the Arab Empire army, and were part of a long-term settlement or military garrison in Southern France during the European expansion in the 8th century. Since their burials were in the Muslim style, but were not separated from the more Christian burials, it is thought that they may have been part of a brief occupation of this region that tolerated diversity- the two communities may have co-existed in this region, an argument further supported by their lack of traumatic injuries.

This is a really fascinating study, and it will be interesting to see whether more evidence pops up in this region. Personally, I’d love to know a little bit more about the individuals themselves- what was their health like, did they have evidence of muscular stress, what were the other burials around them like? Hopefully we will get to learn more soon!