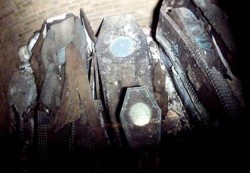 The coffins from the Hyett family vault in the Gloucester Cathedral, shows how the archaeologists would have seen them when it first opened

An extremely well preserved family burial vault was recently accidentally discovered in the Gloucester Cathedral in the UK. The tomb was found in the north transept of the cathedral, and the coffins found inside belong to the Hyett family who used the vault during the 17th and 18th centuries. It was found by archaeologists during an excavation to determine if they could put a lift (elevator for my American readers) into the cathedral. The vault was identified because it matched the ledgerstone set in the floor above the vault. So why is it surprising that they found a family vault beneath the a stone that marked its position? Cathedrals get restored and renovated frequently, vaults are shifted or filled in, so usually when these ledgerstones are removed  there is a mix of dirt, wood and other materials beneath them. Finding an intact vault is a fantastic surprise, and the coffins within it were very well-preserved- you can even see the name plates of the individual family members on the coffins.

But wait… what is this ledgerstone you keep talking about?

I kept seeing this term throughout the article, and was wondering that myself. What is a ledgerstone? According to The Ledgerstone Survey of England and Wales, a ledgerstones are “the flat stones placed over a grave inside a church, usually incised with the name and dates of the deceased. They are often decorated with heraldry and many include interesting inscriptions about the person, their family and their life in the local community.” If you’ve ever been walking through a church and noticed what looks like grave markers in the floor- those are ledgerstones, and they do mark the locations of the deceased in many cases!

The ledgerstone for the Hyett family vault reads that the tomb includes Benjamin Hyett & Elizabeth his wife, daughter of Joseph [can’t read last name]. He died 1711 and she died in 1708. Their children were also buried with them in the vault, and at there are the dates for at least three children being buried with them.

Ledgerstones are common in the floors of cathedrals and churches, and provide a record of who is buried beneath the floors and in the walls. Usually these individuals were of higher status, either by wealth or social standing, which afforded them a burial within the walls of the church rather than outside of them. They were at the height of popularity during the 17th through the 18th century, and can be found through England, Wales and much of Europe. The stones themselves are laid in the floor, usually above the vault or burial of the individual (although these get disturbed frequently), and they are inscribed with the name, an epitaph, dates, family names, coat of arms, and other decorative imagery like skulls, hourglasses, images of the individual, skeletons and more.

Recently there has been a push to record ledgerstones from Britain. One of the features that makes them a unique memorial to interact with is the fact that you walk across these grave markers. In cemeteries, many people avoid trying to walk over graves, and the term ‘someone is walking over my grave’ is meant to indicates sudden chills or shuddering and is not really a positive sentiment. However, ledgerstones are a memorial that we directly interact with- we read the names as we pass through the church, actively touching and remembering the dead. But this feature is also why these stones need to be recorded. Because peple walk over them every day, they are beginning to wear from the traffic and in some cases, we can no longer read the inscriptions. Stones become damaged as churches are renovated, the stones weaken from furniture being placed on them, and over time the shift in the earth causing cracking. While carpeting or installation of raised floors can protect them, it means that they aren’t being seen. By recording them, we maintain their value as historic artifacts, but also as what may be the last physical remembrance of the individual who played an important role in that community. 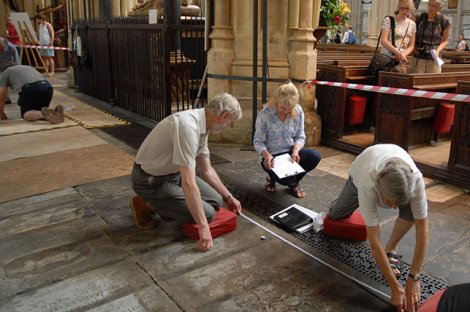 A great example of preserving this history is the recent work at Bath Abbey to clean and record all the ledgerstones prior to their removal during installation of a new heating system in the floor. This is a fantastic example of the community coming together to preserve an important piece of history. You can learn more about the project at Bath Abbey’s website.

One response to “New Morbid Terminology: Ledgerstones, Grave Markers You Can Walk On”