It is the first week of school here at Michigan State University, and not surprisingly, we’ve got super high temperatures and crazy humidity. It feels like you’re entering a steam room when you step outside. The start of the school year means I get to start looking forward to cooler weather. I love Michigan in the early Fall- it means that the nights are cool and the days aren’t too hot. So in honor of the end of hot weather, I thought it would be appropriate to look a little more at a region I don’t normally get to discuss… Iceland. A lot of what we know about Iceland and how it was settled comes from Norse sagas and folklore. These historic texts and stories do give us a glimpse into what life was like on the edge- we know about their economy, the environment, changes in weather, abundant wild resources and their decline, the large family based farming communities, and the eventually deforestation and decline. What we don’t know is how accurate these sagas were, and what the people living through these periods experienced- a new article by Zoëga and Murphy (2015) seeks to rectify this. 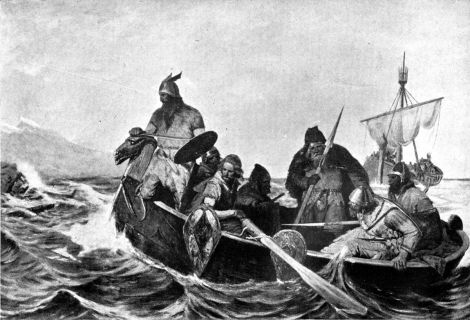 “Norsemen Landing in Iceland” by Oscar Wergeland – Guerber, H. A. (Hélène Adeline) (1909). Digitized by the Internet Archive and available from Wikimedia Commons

During Fall 2002, a previously unknown Christian cemetery was located during construction work in Skagafjörður,North Iceland.There were no surface indicators of the cemetery, and no written sources to indicate that this site had existed. Excavation of the site over two summers revealed 52 graves with the remains of 53 individuals. Using carbon 14 dating methods, it was determined that the site dated around the 11th to 12th centuries, and was only active for around a century. Christianity had only just begun during the 11th century, and prior to that, burials were simply placed around the farmstead. With the religious conversion, farmers would erect small household churches and cemeteries that would serve themselves and their families. Since these went out of favor during the 12th century as large community churches and cemeteries were erected, these household cemeteries only served three to five generations of family members and their dependents. This sample therefore represents an important snapshot of what it was like to live in Iceland as it was first being settled and at the early stages of Christian conversion.

The sample includes 53 individuals, with 14 adult females, 10 adult men, 3 unidentified adults, and 26 sub-adults, 21 of which were under the age of 3 years. The demography of the sample supports that this cemetery served a single family over a few generations, and interestingly, there was some spatial division with women more to the north and men more to the south. The high infant mortality is expected among a population living in harsh conditions- even today, though in arctic or sub-arctic conditions have lower fertility and higher infant mortality.

Overall, the adult population is slightly shorter than is normally found among Norse communities, and 33.3% of the individuals have evidence for defects in the enamel of their teeth. Both of these are indicators that they suffered from stress as children. 29.3% of the individuals suffered from porotic hyperostosis, a formation of lesions within the skull and other bones, and indicates dietary deficiencies, most likely anemia. Since their diet would have been high in meat, it is unlikely that the anemia was caused by a lack of iron, which is found in abundance in red meats, and it is more likely it was caused by conditions like gastrointestinal infections, chronic dietary deﬁciency or deﬁciencies in Vitamin B12 or folic acid. While none of the individuals had caries (cavities), the entire adult population had a build up of calculus (tartar build-up that becomes calcified) and high dental wear- this likely points to low consumption of barley and wheat, but high consumption of dairy products.

Zoëga and Murphy’s (2015) study of the cemetery at Keldudalur provides us with an important snapshot of the experience of one household in a sub-arctic region of the world. Infant mortality was high- most children did not survive beyond three years- although if they did they had a fairly high life expectancy.  While they weren’t as susceptible to many of the infectious diseases rampaging throughout the medieval Western world (including, but not limited to tuberculosis, brucellosis, leprosy or plague), they were highly stressed by the environment. Many individuals suffered from dietary deficiencies due to the harsh conditions, and the high rates of trauma among men indicates that they had a hard working lifestyle where injury was common. These men, women and children adapted to the cold climate as best they could, and their skeletal remains are evidence of their struggles.

G. ZOËGA AND K. A. MURPHY (2015). Life on the Edge of the Arctic: The Bioarchaeology of the Keldudalur Cemetery in Skagafjörður, Iceland International Journal of Osteoarchaeology

7 responses to “Living on the Edge: Bioarchaeology of Medieval Iceland”