Today in my ANP 203: Introduction to Archaeology class, we are talking about ethnicity vs ancestry, so I thought it would be a good time to repost this article on asking the right questions about ethnicity. Ethnicity is a tricky thing- as an American I have a highly mixed ancestry with German, Dutch, English, Irish, and other influences blending together. However, my family has chosen to emphasize some of these ethnic identities, as can be seen in our preferences for certain types of sausages at summer cookouts and our celebration of specific holidays. Ethnic identities are not necessarily based on our biological past, but they can be influenced by it, and we can choose to emphasize certain identities in certain times or places. With the complexity of ethnic identity today, can we actually excavate ethnicity in the past? Is that even the right question to be asking? 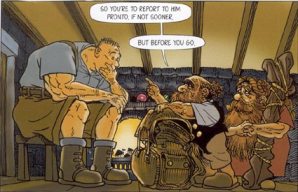 Carrot and his adopted dwarf parents, from “Guards! Guards!” the graphic novel interpretation of Pratchett’s work

A good example of this is found in the work of Terry Pratchett. In a number of Pratchett’s novels, there is a character named Carrot Ironfoundersson. He is a Lance-Constable in the Ankh-Morpork City Watch, is approximately 6’6″ and is a dwarf. How is an extremely tall individual a dwarf? He was adopted. However, he follows dwarfish rules throughout the book, is offended by dwarfish jokes, pines for the traditional dwarf foods, and has a crush on a dwarf girl in his first novel appearance. He is considered part of their ethnic group throughout the stories. If he were to die, he would be buried in the traditional dwarf way of having your axe with you. Hypothetically, if an Ankh-Morpork archaeologist were to excavate his grave a hundred years later, how would he interpret this? Why would a human be buried with a dwarf axe?

Ethnicity in the discipline can be defined in a number of ways, though it is often implicit. It can be biologically determined, based primarily on genetic relatedness, functional based on shared cultural behavior, or interpreted solely on similar types of artifacts as was done in early archaeological studies. Ethnicity, as defined by Jones (1997) is “identification with a broader group in opposition to others on the basis of perceived cultural differentiation and/or common descent”. Determining this archaeologically is tricky since it requires finding material correlates and biological indicators that suffice. It is further complicated since individuals can have layers of ethnicity expressed in different contexts, and ethnic affiliations can vary in strength of expression over time. Early studies assumed that cultural groups were bounded and homogenous entities that would correlate with distinct archaeological typologies and artifacts. While certain types of artifacts may signal ethnic affiliations, these must be separated from those that signal other group associations or identities.

A modern example would be the ethnic ties to Ireland. Individuals of strong Irish descent in the USA tend to display this through the hanging of flags, maintenance of certain homeland artifacts like celtic crosses, maps, and photos. There may also be a tendency to buy certain kinds of food and drink due to having an Irish upbringing. However, this ethnic identity becomes more widely adopted on St. Patrick’s Day. It could be difficult to determine archaeologically whether a household was actually of Irish descent and had that specific ethnic identity, versus a household that loved to celebrate St. Patrick’s Day and simply had the flags and food for this specific day. Obviously the amount of material, quality, and dispersal could be used to determine the difference- but it is a good example of why this concept is tricky. 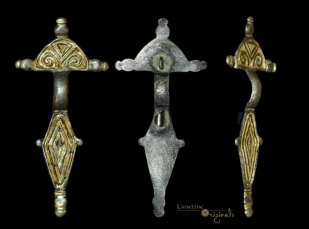 In Western Europe during the post-Roman Empire period, there was a major change in cultural material and funerary practices associated with the migration of the barbarians into this region. Goths, Angles, Saxons, and Franks became the dominant cultural groups across Britain and the continent following the collapse of the Roman Empire in this region. One of the major ways of identifying this change and their spread is the use of specific types of brooches in graves. This single artifact was seen as an indicator of ethnic identity. While this direct association between artifact and ethnicity has been proved false, it is still used due to a lack of alternative methods.

Often the artifacts we are looking at are given designations that cause us to have preconceived notions of what they mean, such as Danube style brooches or Frankish style swords. Halsall (2011) argues that “assigning any ethnic name to archaeological evidence is quite impossible on archaeological grounds alone… In other words, the ethnic interpretation of material cultural data can never, ever result from looking at archaeology alone, and taking it on its own terms” (Halsall 2011:18). He proposes instead that we need multiple lines of evidence as well as textual information before we can begin to interpret ethnicity. Garcia (2011) suggests that instead of questioning what ethnicity the artifacts signify, we should be questioning what the presence of these artifacts mean and what their use was meant to portray to the audience. By focusing on what it meant in that context, we may be able to more successfully identity group differences defined by culture than forcing preconceived notions of groups onto the artifacts.

The problem isn’t solved. It is still difficult to determine ethnic identity of an individual even if one has text and a range of artifacts. As Hakenback (2011) found, differences in biological indicators of migration such as cranial features or stable isotope ratios don’t necessarily match to the differences in artifacts found with the individual. She studied a number of Bavarian cemeteries dating to the early medieval migration period and found no correlation between biological distance and artifact similarity. This means that foreigners were just as likely to adopt local culture and ethnic customs. Perhaps the more important question isn’t trying to identify migratory groups, but rather to look at the internal changes in cemeteries and how individuals expressed identity on a more local scale.

8 responses to “From the Archives: Approaching Ethnicity in Archaeology”