I am fascinated by the diversity of ways that humans have approached death and dying throughout our history as a species. Since you’re reading this, I’ll assume you are interested in this as well. However, when people ask me why I study death, I often reply “because we can learn so much about life”. Growing up, my favorite parts of history books was learning how normal people lived and behaved. History tends to be a grand story of how big men accomplish big deeds and who won what battle in this or that year. But the best bits of history are the little stories- how the average person went about their life, what chores and jobs they had, how they struggled through famine and disease, and eventually how they were buried and mourned by their community. Mortuary and bioarchaeology help us better understand daily life in the past.

A new study by Lopez-Costas, Müldner and Martinez Cortizas (2015) examines a collective burial in order to learn more about daily life in Bronze Age Spain. Their goal is to understand how daily life among the people from this region, specifically Iberia, was affected by the change from hunting and gathering to farming in the Middle to Late Bronze Age. The best way to do this, it by examining the social and biological characteristics of a population, including its diet and health status, from the physical remains of the people who lived through this period. They combine evidence from three sources in order to better understand change in this period: 1) they examine the patterns of funerary ritual and burial, 2) study the demographic and paleopathological indicators of health and population (age, sex, stature, disease, trauma, etc.), and 3) use stable isotope analysis to reconstruct the diet of these people and determine when they began focusing on farming as the primary food source. 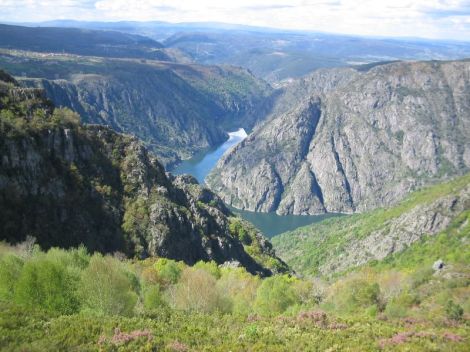 Their sample comes from the Cova do Santo cave, which is located in Northwest Spain, in the western slopes of the river Sil valley. The burials found at this site represent the largest collection of skeletal remains for prehistoric NW Spain. Burial of human remains in caves was a fairly common practice in Northern Iberia from the Neolithic to the Early Medieval period, and more than 350 caves with human remains have been recorded to date. There hasn’t been a complete excavation of Cova do Santo due to the instability of the cave- it has already collapsed in some places and could collapse in more if the earth is disturbed. The human remains that were collected and studied from this site consist only of those that could be collected on the surface. In total, they recovered 61 human and 3 animal bones. Three of the human bones were sent for radiocarbon dating, and produced a range of burial dates from 1890 to 1600 BCE- the Middle Bronze Age. 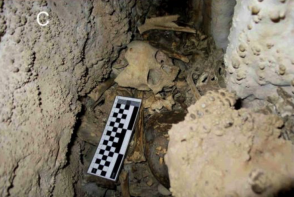 Cranium of sub-adult found in the cave by Lopez-Costas, Müldner and Martinez Cortizas (2015), published in their article

All the of the human remains were found disarticulated and scattered around the cave. It is unknown whether complete burials may be buried below the surface since excavation couldn’t take place, but if they were then these surface bones could indicate older burials that were excavated in the process of burying the more recently deceased. Alternatively, the bodies may have been laid out in the caves as whole individuals, and as they decomposed, the bones may have been moved to other parts of the cave to make way for more recently dead individuals. There were no signs of grave markers or indicators of individual identity, meaning that the cave was the location of a collective burial site, where group identity was more important than individual identity.

Analysis of the remains determined that there were 14 individuals: six women, four men, three subadults and one individual of indeterminate sex and age. However, this number is likely higher since only limited remains could be studied. All individuals were a relatively young age, less than forty years old. However, many show signs of degenerative joint diseases including osteoarthritis. This may be due to intense physical activity beginning at a young age. Some also had indicators of stress including non-specific infection and minor porosity potentially due to nutritional deficiencies. There was very little evidence for trauma and no evidence of interpersonal violence, despite the fact that this has been reported for this region and period. Based on the stable isotope ratios analyzed in 12 of the individuals, they were not consuming marine resources or agricultural staples like millet. This suggests that during the Middle Bronze Age, farming had not yet been adopted in this area.

It will be interesting to see whether Lopez-Costas, Müldner and Martinez Cortizas (2015) are able to go back to the cave site and complete the excavation of the remaining individuals. There are a couple really interesting parts of this analysis. First, the collective burial and funerary behavior of this group is intriguing and should be explored further. Second, evidence from broader Spain would argue that the Bronze Age was a period of agriculture and violence, and yet this study proves otherwise. I’d love to know more about how this study fits with the bigger picture of change and continuity in this region and period!