Temple Relief from Deir el-Medina, via the Institute for the Study of the Ancient World on Flickr

Text is an interesting type of artifact. Early historic and archaeological studies often took text as the truth about the past. It was accepted that we could read a passage from a historic document and that the archaeological record would simply support these ‘known facts’. However, text isn’t always accurate and it comes with a strong bias of the individual writing it, which most often was elite males. For example, my masters thesis compared the prevalence of rickets (a vitamin D deficiency that causes bone deformation in children) as reported in medical and government texts during the 17th and 18th centuries, to the actual skeletal remains from this era. These texts reported that it was “fearcely spread… some forty years ago in the western parts of England; and since then… has infested infants’ cradles through nearly the whole of England”, and that “no distemper is more frequent in infants than the rickets” and that few families could escape the epidemic. However, when we look at the skeletal evidence of deceased children and adults who may have had the deficiency but didn’t die in their youth, these claims are not supported. Were the doctors and public health representatives lying? Probably not, but perhaps they only saw the children who were sick- not the hundreds who were healthy. Or maybe they were exaggerating slightly to show the importance of their medicines and cures for this deficiency. Text can be helpful but adding another piece of evidence to the archaeological record, but we need to be careful in how it is interpreted.

A new study by Austin (2014) compared the written evidence for health care in Ancient Egypt against the skeletal evidence for disease, trauma, and care of individuals. She specifically examines the site of Deir el-Medina, located on the west bank of the Nile, across the river from modern day Luxor. The site os Deir el-Medina has been investigated since the mid-19th century, and was first excavated in 1905. The site was a village for the artisans who worked on the tombs in the Valley of the Kings from the 18th to 20th dynasties of the New Kingdom period (approximately 1550–1080 BCE). At that time, the settlement was named Set Maat, meaning the place of truth. From 1922 to 1951, a French Egyptologist named Bernard Bruyère excavated the human remains from the settlement. However, at this time, bioarchaeology was only a fledgling field- so many of the mummies and skeletons were left unstudied within their tombs. It is these remains that Austin used during her dissertation study to examine health care and occupational stress within the artisans of this village.

Texts from this period note that the artisans working to build the tombs in the Valley of the Kings were under large amounts of occupational stress and grueling conditions. However, they also had access to free medical checkups and had the ability to take paid sick days. For decades, evidence was found in texts for the presence of government supported health care systems, but it was unknown whether this was simply propaganda to make work conditions seem better or whether artisans truly could take advantage of a health care system. Austin (2014) is the first to undertake a detailed study of the human remains from this site to assess whether these textual claims were true. 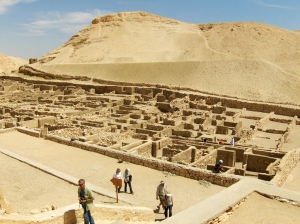 Austin (2014) found clear evidence of occupational stress in the human remains. She notes that it was a hard climb from the village to the Valley of the Kings, evidenced today by the presence of one thousand stone steps from one to the other. The human remains clearly show arthritis in the knees and ankles in many of the male skeletons at a much higher rate than that found in similar working populations. One male individual had evidence of osteomyelitis, an inflammation in the bone due to infection. The severity of the inflammation shows that event with paid sick leave, the individual most likely continued to work throughout the infection. The pressure to work overshadowed the necessity to heal. In numerous texts, she found that artisans were under immense social pressure to take care of their family and friends for fear of public shaming, divorce or disinheritance. Austin (2014) will continue to study these remains in an attempt to get more detailed information about what types of diseases were present in this community and how this relates to the medical texts from the period.

What I find so fascinating about this study is that it helps us better understand a segment of a population that we don’t normally hear about. When we read history books about Ancient Egypt, they focus on the pharaohs and the elite. Studies like Austin’s help us better understand what the working class was experiencing in this time period. It gives us a fuller and more balanced presentation of what life was like in the past.

7 responses to “Comparing Text with Human Remains in Ancient Egypt”