Rock found on Mars that sort of resembles a femur but not really, via CNet

It’s just a combination of sand and wind that has caused a rock to have a similarity to a femur. But its not a femur. Its a rock.

But let’s just get this conversation out of the way once and for all.

Aliens and archaeology have had a weird relationship for decades. Human remains in particular have been subject to this fanaticism. On the one hand, alien enthusiasm has caused for increased interest into certain topics like cranial modification and the Nasca lines. On the other hand, it can be extremely frustrating having to deal with questions about the alien involvement in the construction of the pyramids or creation of crystal skulls. Humans are fascinating and amazing creatures that have been able to pull together to create highly imaginative and awe-inspiring monuments. Since the beginning of our species, we’ve been creatively solving problems, pushing limits, and shaping the world in fantastic ways. But for many people, human creativity and awesomeness isn’t the reason why we were able to create aqueducts or construct sky high monuments before the industrial revolution. Aliens. Aliens are the answer. Perhaps it is because we’ve hit a point in our human existence where our own earth is not as unknown as it was before. Perhaps they are searching for the Lost World of Sir Conan Doyle or the great adventures of Allan Quartermain. For me, our past is the lost world that we can explore. For others, its space. It is the unknown that encompasses our planet. And the way of connecting to this unknown, to finding the lost adventures of our Victorian forefathers, to exposing the truth- the real truth- Aliens.

Here are some of the more popular ‘alien’ related bioarchaeology finds. 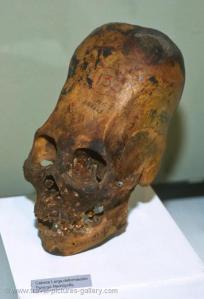 In 1927, a necropolis was discovered by respected Peruvian archaeologist Julio Tello. He was able to recover 429 mummy bundles that contained remains dating to from around 800 to 100 BCE. The mummies were some of the best preserved to be found in Peru, and the find led to a better understanding of burial practices for this period. Each mummy was wrapped in cotton cloths with detailed embroidery, placed in a sitting position facing north, and buried in the Necropolis. All were male and all had high quality grave goods suggesting that they were of higher status than the average person. Another way that there high status was recognized, is that many of them had skulls that were heavily altered and elongated. The cultural deformation of skulls is well understood and documented in a number of cultures (you can learn more about the actual process here).

However, this explanation wasn’t enough for some people. Some theorized that the deformation in the skull was a natural phenomenon, and these elongated skulls were evidence for a new type of species, likely with alien origins. Over the last few years, there have been a number of pseudo-archaeologists who have gotten their hands on tissue samples from these skulls and argue that they have DNA proof that these are alien species. Sadly for us, they aren’t actually sharing any of the DNA tissue results, nor are we given any actual data- just their final conclusion that these are aliens. If you’d like to learn the whole story, and just how bad their investigation was, I’d suggest checking out this amazing article about it on Bad Archaeology: The Paracas Skulls.

They are not. They are humans with modified crania- no need to jump to alien conclusions.

With that name alone, you know this one is going to be dreadfully awesome.

Starchild Skull- also not an alien, just a child with a genetic condition, via Wikimedia.

In 1999, a paranormalist claimed to have obtained a child’s skull from a couple in El Paso, Texas who originally acquired it from a mine tunnel in the 1930s in Mexico. The skull was found buried alongside the remains of an adult female. As it is easy to see from the picture, the skull is extremely enlarged in the cranium, much like the aliens from Mars Attack! (obviously a good basis for what real aliens look like). The child was determined to be 4.5 to 5 years (based on the dentition found in the skull) and the cranium is 1,600 cubic centimeters, which is 200 cm³ larger than the average adult’s brain, and 400 cm³ larger than an adult of the same approximate size. Based on this, the paranormalist claimed that this child was the result of a normal female human breeding with an extraterrestrial or was perhaps the result of genetic experimentation.

Luckily for us, real scientists conducted two separate DNA tests in 1999 and 2003. The first found that the child was a human male that received an x and y chromosomes from each of his human male and human female parents. The second recovered Mitochondrial DNA from the skull, and determined that it is indeed a human child, though one that likely suffered from congenital hydrocephaly. Congenital hydrocephaly is more commonly known as “water on the brain”, and it is a medical condition in which there is an abnormal accumulation of fluid in the cavities of the brain. This leads to increased pressure and enlargement of the head of the individual. It can also result in death.

There are a couple ways you can take this: 1) obviously this chick doesn’t know the real truth, or 2) the human body is an amazing thing that can be changed naturally by disease or modified through human intervention- aren’t we a cool species!

Personally, I think its amazing how bones can respond to pressure, internally and externally. Sure, aliens would be cool. But I’m content for now to look at the amazing human skeletal system, and watch alien movies in my free time.

9 responses to “Was There An Alien Thigh Bone Found on Mars?”