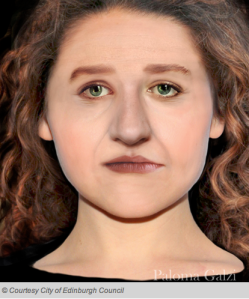 Facial reconstruction of a woman from the Edinburgh excavation, via Edinburgh City Council and Culture24

Excavations in Edinburgh revealed a previously undiscovered cemetery dating to the 1500s. The South Leith Parish Church cemetery was discovered while working on the new Edinburgh Trams project. Over the last five years since its excavation, bioarchaeologists have been working to identify these individuals, and recently, a forensic artist gave them faces. Using stable isotope analysis, macroscopic identification techniques, and facial reconstruction, the people of this Edinburgh cemetery have been reconstructed. For example, the woman in the photo was an adult aged from 25-35 years, and died around the late 14th-early 15th centuries. She was small, only 4’11” and was buried in a communal grave with two other adult females and a child between 7 and 12 years old. When she died, the cemetery was used primarily for St. Anthony’s Hospital.

This is a fascinating process, but how is it done and how accurate is it? Let’s look into it a little more!

Let’s say we have a skeleton of an individual, historic or modern, that has been found, and we want to do a facial reconstruction. The first step is going to be collecting as much information as possible about the individual. The entire skeleton is examined to determine age, sex, stature, presence of disease or trauma, and general lifestyle indicators like muscle markers. These are used to help the artist better understand the entire individual so they can make informed decisions on how to shape the face, what details to include such as making it look more feminine or masculine, and whether the individual should be young or older. 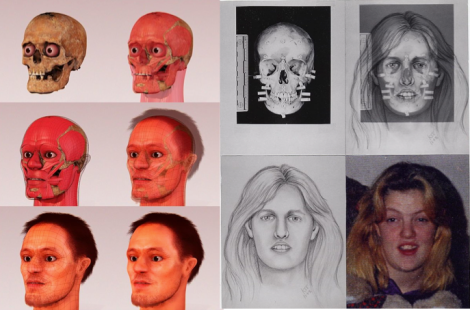 Examples of 3D and 2D facial reconstructions, via Wikipedia

After this, there are a couple options. The face can be made using clay making an actual 3D model, or the individual can be drawn in 2D, or it can be done using a computer. 2D modeling is the most efficient and currently the least expensive option. If details need to be changed or altered, sections can easily be erased and redrawn. Clay modeling is the most expensive and least efficient method, but it does provide a model of the individual in 3D that may be more accurate. The main problem with clay, is that unless a mold is casted prior to modeling, the skull will be used for the reconstruction and cannot be studied by anyone else. Computer modeling is increasingly a popular method as it allows for the artist to be able to quickly shift variables like hair or eye color, and produces a 3D model that doesn’t prevent simultaneous use of the skull. It is done by taking photos of the skull, uploading them into the program, and creating a 3D rendering based on that. However, it does take computer skill to be able to do this, and isn’t always accurate as photos can become distorted.

Regardless, the next step is determining the depth of skin across the skull to reconstruct the basic architecture of the face. For clay or drawn methods, the skull has small markers places across the bone that show in general what depth of the skin will be for most people. If we know from the skeleton that the individual was highly ill or malnourished, the markers may be made lower, or if their bones reveal they were larger the markers may be made taller. From here, the depth of skin can be approximated by the computer, hand or by laying clay strips down across the skull.

Once the basic structure of the face is done, the artist will carefully add in more details like shaping the nose, adding lips and brows, and begin to put details onto the individual. This is where the art gets a little more subjective- choices like hair color, skin color, eye color, presence of scars based on underlying hard tissue trauma, and overall look of the individual is decided.

There are issues with this type of interpretation. First, the correlation between bone and soft tissue isn’t completely reliable. in general we know things like that skin is fairly thin around the forehead, but thicker in the cheeks- although this can vary by weight, age and other factors. The depth of skin is based on approximations of known living people, so it is only an average- not an exact science. Due to the problems of this method, it cannot be the only piece of evidence for complete identification and is not viewed as a reliable source in court.

Despite this, it adds to the larger body of evidence and can still aid in identification of lost individuals. Reconstructing faces may create new leads in modern criminal cases or encourage a deeper connection to individuals in the past. It shouldn’t be mistaken for accurate representation, but rather a generalized interpretation.

17 responses to “Giving the Past a Face: Facial Reconstructions”