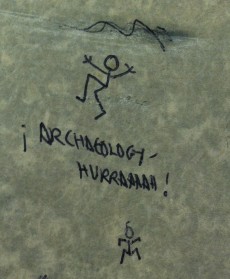 A doodle I found on an archival notebook from the Alwalton excavation, notebook held at Museum of Peterborough

When we excavate an archaeological site, all of our paperwork, journals, interpretations, notes, maps, photos, and the artifacts and human remains are put into storage either at a country office, museum or other similar holding site. While the finalized interpretations, cleaned up photos and maps, and conclusions may be printed in a volume or manuscript, these original notes potentially hold secrets about the dig, other potential hypotheses, or details that were deemed necessary for the final product. Of course, as our interpretations improve from working with other sites, and our methods of analysis become more accurate with new technology, it does sometimes become necessary to reassess the old original notes to see if they may have been hiding some clue to better understand the past. Over the last two summers, I’ve been doing a lot of archival work. I’m going through boxes of notebooks, letters, maps, diagrams, journals, and even personal doodles, in an attempt to glean more data about the sites I’m researching. Even after we complete an excavation and publish the book, it doesn’t mean that the work on the site is done.

In the 1950s, Jean Roche excavated the Iberomaurusian necropolis of Taforalt, Morocco. The area was occupied by an Upper Paleolithic group associated with the necropolis between 15,000 and 12,500 years ago. The site had 28 multiple burials, and based on the presence of sepulchral (funerary) structures, wild ram horns and the use of ochre, Roche argued that there was a complex mortuary program in place here. Due to a lack of published reports, previous interpretations of the site have primarily used the human remains from 40 individuals as the basis for their study. Based on this, they have argued that beyond the complex funerary behavior, there was also evidence for manipulation of remains, intentional violence and possibly cannibalism. However, recently Roche made some of his unpublished maps and photographs from the excavation available for study.

A new article by Mariotti, Condemi and Belcastro (2014)* investigates previous work done on the Iberomaurusian necropolis collection, and compares this against the new archival evidence provided by Roche. There is little material evidence of this Upper Paleolithic culture, however it is obvious from this evidence that they had a complex society with a rich funerary tradition. Archaeologists have found blade and bone tools, use of dyes, production of jewelry, zoomorphic figurative art, and even evidence of a successful cranial trephination. Excavations at the cave necropolis were completed in the 1950s and the 2000s, and the results from these vary. The 1950s excavation found evidence for secondary burial of individuals in a number of graves, whereas the 2000s excavation did not find evidence for movement of bones into different graves after burial. Due to differences, they propose to address three questions using the new archival evidence: 1) is there both intentional secondary and primary burial present at the site, 2) were the bones of individuals divided between graves, and 3) is the movement of bones between graves intentional? Mariotti, Condemi and Belcastro (2014) compared the collection of human remains, available excavation notes, with the new evidence of the sites’ maps and photographs. Each grave is individually compared to determine what bones were originally present, what bones are present in the collection, and how this can be used to understand the funerary behavior occurring.

One of Roche’s historic photos from the excavation, via Valentina, Silvana, and Giovanna (2014)

Based on their assessment, they argue that there was a specific chain of events associated with the death of an individual. First, the deceased was buried in the cave near other individuals. Second, the grave was re-opened after a period long enough to allow for decomposition to have removed the majority of flesh and soft tissue. Third, bones of this individual would be removed from the burial in a ritual that involved the use of ochre. During this, bones from other graves that had been removed would be placed in the newer burial. Finally, the grave would be closed and capped with a large stone or wild ram trophy horn. Mariotti, Condemi and Belcastro (2014) propose that this fits the tripartite rite of passage sequence as defined by Van Gennep: separation from the group through death and primary burial, a liminal period where the body decomposes, and representing the transitional phase between two states, and reincorporation whereby the deceased’s remains are divided into other burials, and their burial is given bones from others- making them part of a new group of ancestors.

Mariotti, Condemi and Belcastro (2014) conclude that while primary excavation records provide the best source of information, the new evidence provided by Roche has allowed them to create a more nuanced interpretation of the mortuary behavior of the Taforalt population. “We propose that death became a recognized social condition, and that the funerary rites became true rites of passage necessary to accompany the transition of individuals to their new social status.” This was a really interesting article based on the fact that they used new evidence to challenge old interpretations- while they come to a similar conclusion, it is a more appropriate and better evidenced one.

*In a previously published  version I wrote the wrong names, thanks to the reader below who pointed this out!