Over the past week, I’ve been visiting a variety of museums in order to collect primary data for my PhD dissertation. My first stop was the Museum of Winchester to collect data and information from the Worthy Park Anglo-Saxon cemetery, and then I was off to Chester to meet with Professor Howard Williams, who is sitting on my dissertation committee. Following the more educational aspect of my trip, Howard gave me an amazing tour of Northern Wales that included many fantastic mortuary sites! He does an excellent job of going through the history of each site on his blog, so here I’m just going to summarize each and share some of my personal favorite moments and parts from them.

Grave markers in Penmon, note the difference between the slate and stone markers

There are a number of fantastic death-related sites that you can visit in Wales. However, one of the most interesting things I noticed while visiting the various cemeteries and churches, was that there were a high number of headstones that were made out of slate. I had never seen these types of markers before, and what is so astonishing is that they appear to be almost new! They do not suffer the same wear and tear that is found in other types of stones. At both the Penmon Priory and the church at Caerhun, there were fantastic examples of these types of headstones. So if you are traveling through Wales, I suggest that you take the time to check out these incredible dark colored markers- personally, I think I’d like one when my time comes!

Bryn Celli Ddu: This site has an interesting two stage monument built during the late Neolithic. In the first stage, it was a circular henge monument made up by circles of standing stones, a ditch and a bank. In its second stage it was made into a passage tomb- a chamber of stones that is covered by a large mound of earth. When the tomb was excavated in the 1920s, there were both burnt and un-burnt human remains. What is really interesting about the site is that it is still used as a sacred place for modern Druids. As we were walking through the tomb, you could see evidence of this modern day interaction. (Check here for Howard’s writeup and history of the site)

Bodowyr Dolmen (with bulls in background)

Bodowyr Dolmen: Another type of Neolithic structure that consists of upright stones with a capstone to create a tomb. It likely would have been covered with more stones to create a complete protected cairn structure, however all that remains now are the dolmen stones. This type of structure is more common in Wales and there are other examples of it, whereas the passage tomb at Bryn Celli Ddu is a more unique site. Honestly, the site was cool but I was a little more focused on the crazy cows that were surrounding us- just for future reference, if a field is full of bulls, probably wait to visit the Neolithic site until a later date- or admire from afar. 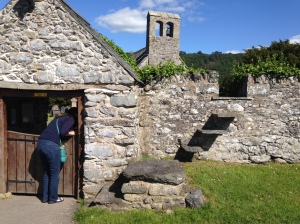 Church at Caerhun: Our final stop on the trip was a small parish church at Caerhun. This is another site that has fantastic headstones that have both English and Welsh markers. My favorite part of the site however was not the stones- it was the small steps that were on the exterior of the wall surrounding the church. When you approach the church, there is a small gatehouse entrance with seats along the side. During a funeral, the coffin would be placed in this gatehouse and the pall-bearers sat in the seats until it was time to move the deceased. However, this meant that people attending the funeral didn’t have access into the church since the only entrance was blocked by the coffin. In order to allow people in, the church had steps built into the wall so that people could climb in and out of the church area. Of course, both Howard and I elected to take these steps into the church, rather than enter through the gatehouse. (For more on the actual church, check out Howard’s blog)

There were many other places we visited including Penmon Priory, Caer Leb Iron Age Fortification, Maen Achwyfan, and a lovely tea shop past the Penmon Priory that was near Puffin Island. I would highly suggest visiting this area!

One response to “Bones Abroad: Northern Wales with Howard Williams”