As we enter a new year, there have been numerous lists about the top archaeological finds from this past year. Archaeology Magazine releases a great list every year and Heritage Daily has an interesting one as well. This year the general consensus is that the number one archaeological find is the burial and human remains of King Richard III. You can read my full review of the evidence here: Examining the Richard III evidence. While the find was quite interesting- I don’t really think it was the number one find. My reasoning for this was that Richard III was a celebrity burial that was sought out. While finding the remains of this infamous individual is intriguing, it doesn’t add to the history. We know who he was, we know generally how he died, and this dig confirmed much of what we know. The reason I love mortuary and bioarchaeology is that it gives us the chance to explore how average people lived and died, and to contradict or reveal unknowns about history (For a much fuller and eloquent discussion of the larger problem with the Richard III excavation check out Howard Williams writeup at his blog). For me, the best finds are the ones that tell us how normal people lived in the past, how they died, how they interacted with and created ancestors, and how they prepared their deceased loved ones for different types of afterlives. With that in mind, here are the top finds that I think changed our perspectives and added to our understanding of the past.

Top Bioarchaeology and Mortuary Archaeology Finds and Studies from 2013

1. Determining cause of death from the soil of the grave

A new technique was developed by Rasmussen et al. (2013) to answer the question of cause of death using soil from a medieval burial. When the body decays in the grave without a coffin, compounds are released from the body into the surrounding soil. Most of these elements will over time migrate into the groundwater or transform into other compounds. If the soil is analyzed in a number of areas, and the ground around the remains produces elements not normally found in the area, it is assumed that these came from the deceased. The soil was analyzed around the location where the kidneys and lungs would have been, and mercury sulphide was discovered. Based on the presence of mercury around where the lungs were, they were able to determine that the child under investigation had been exposed to the element at least 48 hours before they died since mercury dissipates after that amount of time if the individual is still alive. This was a truly awesome find and will surely change the way we excavate and approach burials. (See full post: Mercury Poisoning and the Day Before Death)

Lesson? Take soil samples and collect all possible evidence- you don’t know what may end up being important! 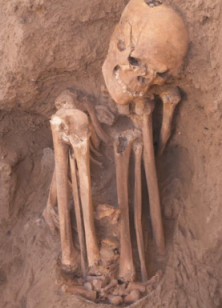 Ortiz, Chambon, and Molist (2013) examined Pre-Pottery Neolithic seated burials, a unique practice that has high potential for disarticulation with decomposition. The discovery of these seated burials meant a new excavation strategy. The traditional horizontal burial can be completely revealed by the slow removal of layers, however a seated burial cannot be revealed in the same way and must be excavated in vertical layers to reveal the body position of the individual. The method itself is quite unique and an interesting approach, but it also led to challenging older interpretations.  One of the major discoveries was that in all cases the skull and post-cranial skeleton became disarticulated due to natural processes and are not part of the widely documented Pre-Pottery Neolithic practice of skull removal. The archaeologists suggest therefore that it may be important to re-analyze previously interpreted isolated skulls and disarticulated bones from this region and period. It is possible that the practice of skull removal may actually be related to post-depositional changes associated with seated burials. This is both an interesting method and interpretation that may lead to changes in our understanding of this period. (See full post: Taphonomic Analysis of Neolithic Seated Burials)

Lesson? There is no cookie cutter perfect excavation technique, you need to shift method based on sites.

Archaeologist William Kelso recovered the remains of a 14 year old English girl in 2012 from the Jamestown site. Her remains were found in a trash pit along with horse and dog bones that had been clearly butchered. Only 66% of the skull was recovered and some other bones including a tibia. There is no evidence for cause of death and all cut-marks were made post-mortem. The evidence of cannibalism consists of: four shallow cuts along the frontal bone, seven shallow cuts along the lower mandible, deeper cuts along the temporal, the cranium had been split at the back, and there were marks along the tibia. From the manner of the cut-marks, it was determined by Douglas Owsley that the cuts had been made by at least two different individuals- one experienced in butchering and one who was not. The locations of the marks suggests that they had removed the girl’s brain, tongue, cheeks and leg muscles. They posit that the girl was likely a servant on one of the re-supply ships who died of natural causes, but was then butchered due to the starving conditions (Stromberg 2013). While we knew previously that the settlers at Jamestown suffered and were forced to consume a wide variety of animals from rats to cats, cannibalism of the deceased shows just how dire things became. (See full post: Starvation Cannibalism at Jamestown)

Lesson? Always carry a snack with you.

4. Re-interpretating the concept of ‘leper’ as outcast

Roffey and Tucker (2013) examined a leprosy hospital and cemetery dating to the medieval period. Traditionally, leprosy cemeteries are viewed as places for outcasts. However, they argue that this site was unlike many other leper hospitals in England, and  was truly dedicated to leprosy. Despite the fact that they were consigned to a life outside of the normal town, the evidence from the cemetery and site show that the lepers were not down-trodden outcasts, but rather were well-taken care of and provided proper burials. The article concludes with one warning that I find extremely interesting. Roffey and Tucker (2013) warn against the interpretation that lepers were seen as sinners and that their disease was somehow thought to be related to religious downfall. They posit that this interpretation is more likely due to Victorian biomedical and segregationist ideas than based on actual medieval experience. As archaeological work reveals more evidence for leprosy in this period, it appears that these hospitals were not homes to the stigmatized outcasts, but rather were charitable institutions and refuges. This article is important because it questions a well-developed assumption about the perception of leprosy. (See full post: A New Perspective on Leprosy)

Lesson? Don’t always accept prior interpretations, understand where they came from first. 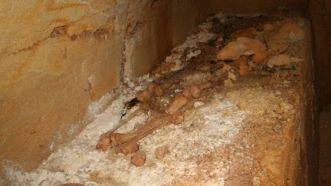 The Etruscan ‘Prince’, via Fox News

5. The prince who was a princess

Archaeologists opened a sealed rock cut tomb in Tarquinia. They believed the first skeleton to be the remains of an Etruscan prince who was holding a spear and had a fibulae at his chest which indicated he had been dressed in a mantle. He was accompanied by the cremated remains of his wife who was jeweled and placed on the second platform, and food remains within a large bronze basin at his feet. A number of grave goods, which included large Greek Corinthian vases and precious ornaments, lay on the floor. Further analysis revealed that the ‘prince’ was a female and the cremation remains were of a male. The problem was that when the gender changed, their interpretation changed. When the skeleton was male the lance was a sign of royal status, and now that the ‘prince’ is a female the lance is a sign of marriage unity between the two individuals, despite the fact that there is evidence that females could hold very powerful roles in this period. This led to some fantastic debates and discussions about the difficulties of interpreting gender, the importance of not drawing conclusions without all the evidence, and that it is never appropriate to project modern bias onto past societies. It reminds us that we must always be careful about how we interpret or reinterpret. (See full post: Oops, the prince is a female)

This is one of the cooler interdisciplinary projects going on right now. The study by Wilson et al. (2013) involved archaeological, radiological, and biological research on three individual mummies: the 13 year old “Llullaillaco Maiden,” the 4 to 5 year old “Llullaillaco Boy,” and the 4 to 5 year old “Lightning Girl”. This study focuses on the ritual itself and the changes the sub-adults went prior to their deaths. First, they were chosen for these roles at least a year prior to their deaths, a chance evidenced by an improved diet. The posture of the Maiden, slumped forward with crossed legs and arms resting on them, suggests that she was highly sedated while she was placed there. Analysis revealed all three children had very high levels of coca and alcohol within their systems, and had been ingesting these for a number of months prior to their deaths with a marked increase in consumption immediately before. The alcohol would have decreased their ability to shiver and hastens death due to cold exposure, though the coca would increase blood flow and have the opposite effect. The position and lack of displacement of the Maiden suggest that she was not conscious when she was placed within the tomb, though whether this is because she was already dead or just unconscious from the drugs is unknown. The combination of approaches allowed them to better understand this important process. (See full post: Interdisciplinary insight into Incan child sacrifice)

Lesson? Collaborate with other disciplines to gain a fuller perspective about death and dying!