We’ve talked quite a bit here about the different ways that human remains can be disturbed once they are buried. We’ve had the “5 Reasons to Remove Single Bones from a Grave“, “Five Reasons for Moving an Entire Skeleton“, “Five Reasons for Disturbing a Burial” and “5 Reasons for Relocating an Entire Cemetery“. In most cases, the removal or disturbance of remains is not a beneficial thing for archaeologists. We like to find our burials in situ, which means that the remains were found in the same way that they were buried. It is also important if the remains are not in their original location that we know their provenience, the original location and position in which they were buried. Of course, due to past archaeological practices not necessarily taking the best notes even that isn’t possible some times. For the most part, a lack of in situ or provenienced human remains is considered a bad thing and causes problems when trying to interpret the site.

However, a recent article by Aspock (2011) has argued that these disturbances can be used to better interpret mortuary rites and attitudes towards the remains of the deceased. In the article she presents two case studies of cemeteries where the high disturbance would normally be interpreted as a negative factor in interpretation. Both cemeteries were in use during the early medieval period: the 6th century cemetery of Brunn am Gebirge found in Lower Austria, south of Vienna, and the mid-7th to 8th century cemetery of Winnall II found in England. At Brunn am Gebirge all but one burial of the 42 were found disturbed, and at Winnall II, of the 46 burials there were 25 suspected cases of post-burial disturbance. During this period, the dead were typically inhumed in a single grave and most were buried without grave goods, though some were richly furnished depending on their status and rank. Disturbing burials, removing grave goods, and grave-robbing were not uncommon during this period, and in most cases any disturbance was considered motivated by materialistic aims. The rise in grave-robbing is often attributed to the rise of Christianity, which changed attitudes towards the body allowing for burial disturbance, and the shortage of precious metals, motivating theft. Aspock (2011) challenges this perspective, and argues that there are alternative explanations for disturbance of a burial that can be discovered if we pay more attention to the remains, burial and artifacts.

First, she examined archaeological evidence for the re-opening of the graves. This includes the presence of pits dug into the grave. When excavating, different holes dug at different times will appear as variations in soil color. At these sites, the re-opened burials had evidence of darker soil in a circular pattern indicating a new pit was dug into the grave after burial. Second, the human remains were examined to determine if the position they were found in was anatomically correct or if there was movement of the remains. Within the grave, the bones can move to some extent due to shifting of the soil with decomposition or be pushed around by small burrowing animals. However, major movement of skeletal elements is an indicator of disturbance of the burial by other humans. Next, based on the burial position they can determine when the grave was open. For example, if the grave was opened soon after death the deceased would still has fleshy elements and would be less prone to movement, but if the individual was fully skeletonized but the coffin still intact they would be able to freely move the remains within that space. Other evidence examined includes how well the pit was backfilled after the disturbance, and what was possibly taken or not taken from the burial. Doing this requires careful attention to taphonomy and burial- for more on this type of excavation read about the Archaeothanatology method.

At Brunn am Gebirge, she found that for the most part graves were reopened around 8 to 10 years after death when the corpse would be partially or fully decomposed. Most often, weapons and buckles were taken from male burials, and brooches and necklaces were removed from female burials. The skull was the most frequently removed or displaced skeletal elements, and this may suggest that it was moved as a precaution against revenants, which will be discussed below. The disturbing pit was often placed centrally over the burial and suggests that these individuals either had knowledge of where people were buried or all burials were well marked. Burials disturbed when remains were completely skeletonized were less likely to be filled in than burials that were still decomposing, another piece of evidence that suggests there was a fear of revenants. She argues that given the evidence, it is likely that while grave robbing was frowned upon and illegal, it was likely occurring frequently in a respectful manner. 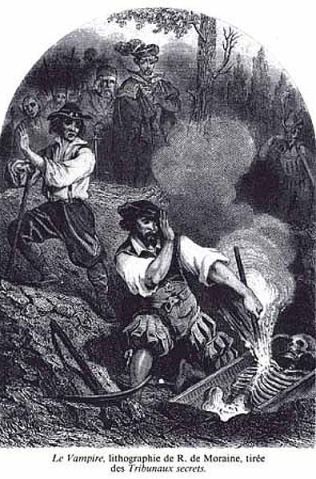 Le Vampire, Vampires are considered closely related to the concept of Revenant, though they are very different from are modern conceptions, via Wikimedia Commons

At Winnall II, except for 2, the 25 disturbances appear to have been done soon after burial of the individuals. The human remains primarily show evidence of being manipulated after burial: bent or twisted legs, heavy ﬂints placed on burials, tied feet, decapitated burials or arms placed in front of the head. In this case, the burials did not have grave goods removed, though in most cases there would not have been any present. Aspock (2011) argues that the reopening of the burials based on taphonomic evidence was done because the original burial did not allow people to respond to different types of lives or deaths. Therefore, it may have been perceived that the original burial was not successful, and post-burial intervention was needed to pacify the deceased. This is evidence for a fear of revenants, individuals who would rise from their grave after death as spirits because they were not given the appropriate burial. During times of misfortune like bad weather or disease, that it was due to something having gone wrong with burial of one’s relatives. This would lead to the re-opening of graves and a number of practices were used to pacify and confine the restless spirits, including decapitating, burning, tying up, weighing down, turning over or staking the corpse.

Aspock (2011) concludes that we need to re-assess our characterizations of re-opening graves as inappropriate or simply grave robbing. She argues that in both cases, there was more care for the death than previously thought. She also argues that we cannot simply ignore these disturbed sites as archaeologically poor, and that a wealth of information can be gleaned from them. Her arguments are extremely interesting, and shift the perspective of grave disturbance. It is important that we consider multiple reasons as to why a grave may be re-opened, and that it doesn’t always represent an inappropriate behavior. If we consider modern reasons, reopening burials may be done to include a new family member or aid in the solving of a crime. It is important to also consider perceptions of the human body in this period, and how the belief in spirits would have changed behavior of those interacting with the dead.

** Article was amended to change he to she when author was alerted of the mistake. Thanks Howard!

6 responses to “Grave Robbing: Not Always What it Seems…”