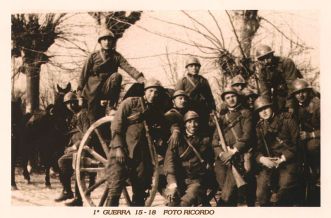 An Italian Battlion from World War I, the Prima guerra mondiale: foto ricordo, via Wikimedia Commons

When excavating historic sites, we gain access to a level of highly informative data- text. Excavating prehistory means that we only have the archaeological remains to tell us who these people were and what they did. But for those sites with text and writing associated with them, we gain access to knowledge about what those living at the site were doing or thought was important. This doesn’t always mean the text is correct- we know now that many diaries and histories were biased towards specific perspectives or meant to convey a certain meaning. We also know that many written laws and rules that governed an area weren’t always followed and only conveyed what they thought society could be. Text is the evidence of what people said they did- not what they actually did. That is why regardless of text or not, archaeology is still important because it reveals the behavior.

For sites such as the one under investigation by Gaudio et al. (2013), there is another type of more objective evidence- direct visuals. Gaudio et al. (2013) examine an Italian mass grave that dates to World War I. From this era we have text, audio, film, and photography. It is these latter two that are so revealing about what actually was occurring. We know from film, photography and text what some of the individuals during the war experienced and how they died. Despite this, archaeology is still extremely important. Media is always biased, and archaeology can reveal these biases.

It is only recently that excavations have been done of World War I burial sites. Gaudio et al. (2013) examine a primary burial site from the mountainous region of the Veneto, specifically the Soglio Melegnon di Arsiero site. This study is part of a 3-year project to improve the recovery and the analysis of fallen soldiers of World War I which previously were collected without study or specific protocol. The remains were recovered in an area where an Italian battalion of 87 B cannons were located. The results and records of this battle are not well documented, so archaeology can provide previously unknown information. They conducted a careful analysis of seven individuals found within a primary grave in order to determine who they were and how they died.

Graphic rendering of the mass grave and photograph by Gaudio et al. 2013

The results revealed that all seven individuals were between 18 and 35 years of age, and ranged in stature between 162 and 175 cm. Four were buried face down, two were buried on their sides, and the final was buried in an unknown position because it was originally recovered by a hiker who unknowingly disturbed and discovered the site. Most had herniated vertebral discs and other signs of degeneration due to working, and also signs of malnutrition. Based on the presence of badges for military vaccinations, religious medals and the remains of uniforms, they were able to determine that they were Italian soldiers.

The trauma analysis was quite extensive. There were three individuals with irregular entry wounds, multiple fractures, and various projectile lesions that are suggestive of being hit with a shrapnel grenade. Three individuals have a clear circular entry and exit wound suggestive of being killed with a gun or at least wounded by one. Two individuals show signs of traumatic amputation and fracturing that is consistent with being blown up in a grenade explosion.  It is obvious that they died during the heat of battle, and suffered very traumatic death.

It is unknown whether they were buried by other Italians or were placed there by the enemy Austro-Hungarians. The fact that they are downwards facing and placed with little ceremony could mean it was a quick burial done by by Austro-Hungarian soldiers, or it could mean that the Italians were in a rush to bury their companions. Either way, there is evidence that they were not buried immediately as all the remains show evidence of larvae or pupae which only occur on bodies that have been left out to decompose prior to burial.

It is quite interesting to compare this burial against other known war burials. The trauma found at this site is above and beyond that most evident and most destructive of any other site I’ve discussed. Individuals are actually missing limbs not due to amputation following the injury, but due to the force of the grenade completely destroying the bone. It is both interesting and horrifying to see the results of World War I from a skeletal perspective. This study gives us a fresh perspective on an event that completely changed war, European history, and is only a century behind us.

2 responses to “Excavating a More Recent Past: WWI Mass Grave”