If you’ve ever seen a crime scene investigation show, you know that bugs can be an amazing source of evidence. Throughout the show Bones, it is the primary job of Jack Hodgins to explore the ways that insects found on the crime site can be used to better understand what happened. They use them for a variety of purposes such as estimating time of death, understanding whether someone was poisoned or using drugs, examine the contexts of death, and determine whether the body was moved at some point. Often this insect evidence provides a pivotal clue in catching the bad guy. 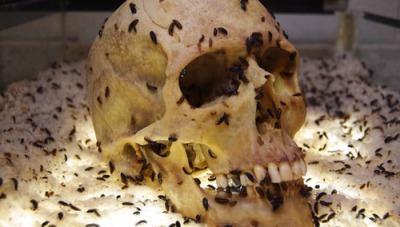 Skull with dermestid beetles eating off flesh, via Tumblr user Oh the Nightmares

Within a few minutes of an animal dying, insects from over a mile will begin to smell it and become attracted to the body. A wide range of insects respond to the deceased, though the first to arrive are those known as necrophagus, dead-eating, insects. Usually blow flies are the first to arrive, as they find the fresh still warm dead perfect for their eggs. These will turn to maggots and then flies within hours, and the stage that they are found in can be used to calculate time at death.  When a corpse is more decomposed but still in the open air, other insects like beetles will start to be found on human remains. Other insects can also be found including mites, moths, and wasps, though the last is likely more related to the presence of other bugs rather than the body. The study of these insects  for better understanding the dead is known as forensic entomology.

Bugs can also be helpful in learning more about human remains in the past. Palaeoentomology is the study of ancient insect remains to better interpret archaeological sites. Insects can be surprisingly helpful when trying to understand burial practices. A new study by Huchet et al. (2013) examines the the presence of insect activity as a sign of funerary practices in the Southern Levant during the Middle Bronze Age. 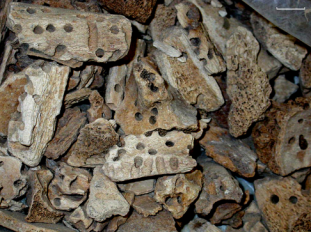 Human remains were recovered from two contexts in this period that have holes throughout the bones. They were recovered from two Southern Levantine archaeological sites: Middle Bronze Age Jericho and Middle Bronze Munhata. There are numerous burial practices attributed to this period and region, including pit-burials, chamber tombs, constructed burials, and jar burials. At Jericho and Munhata, there are primarily rock-cut chamber tombs in which remains are placed, usually collective burials. It was hypothesized that as the tombs were reused, the older remains were fragmented and commingled. Many of the bones found have small holes throughout in similar sizes, about the width of a pencil. It was hypothesized by earlier researchers that these may have been related to human activity involving boring into the bone or some type of disease.

The distribution and shape of the holes was mapped using CT-scans and 3D imaging. The alterations to the bone were compared within the two collections and also against other similar types of holes. It was determined that the holes were all caused by the same agents, and that these were likely dermestid beetles.  The Dermestes species will reach a cadaver when it is in the advanced stages of decomposition, specifically when the deceased is reduced to skin, cartilage and bone. An example that Huchet et al. (2013) cite is that modern studies found that corpses that were mummified indoors often had dermestid activity, and the dermestid larvae were found in grooves within the bone. This means that at the Middle Bronze Age Southern Levant sites, there are human remains which are left in an environment where they become mummified to some extent but are still open to insect activity.

Huchet et al. (2013) argue that this could means a few potential things. The first, is that the burial practices in this period meant that semi-decayed human remains were left out in the open and received a secondary burial in the tombs. This outdoor exposure would have allowed beetles the chance to lay eggs and have larvae bore into the bone. The second is that the beetles somehow were able to gain access to the tombs, and then find their way into the human remains. Either way, it determines that there was human interaction with the remains of the dead following their primary burial that allowed the dermestids the opportunity to gain access to the remains, whether that means opening the tombs to allow entry or leaving the remains in the outdoors for an extended period.

This is a very interesting use of evidence. Instead of using the physical remains of the insects, they use the evidence of their presence. By carefully examining the holes made by these bugs they prove that they are not related to a pathology, are similar to one another, and ultimately determine their final cause. It’s really intriguing to see how evidence of holes in bones can lead to a complete change in the perception of burial practices.