Sacrifice is a delicate subject. It can be voluntary or forced, but interpreting who these people were without text can be extremely difficult. When any hint of sacrifice is found at an archaeological site, it is often sensationalized. Sacrifice is actually defined as the making of a sacred act, coming from the latin sacer for sacred and facere meaning to make. Schwartz (2012) argues that “sacrifice is generally understood to be a religious activity… involving the recognition of and interaction with supernatural entities”. It is therefore distinct from secular killing, warfare, murder and suicide. Sacrifice of both humans and animals has been an important part of ritual and ceremonial practices across the world and throughout time, preserved directly in the skeletal remains of the sacrificed deceased. There cannot be a single explanation for why or who is chosen to be sacrificed- it is a regionally and historically specific phenomenon. In order to interpret each specific case, the context, individuals involved, and religious implications must be analyzed. Bioarchaeology offers a way to directly examine the people who were sacrificed and gain insight into the practice.

A new study by Turner et al. (2013) examines sacrificial victims from Andean South America, specifically from the site of Chotuna-Chornancap in the Lambayeque Valley region of northern coastal Peru. They hope to assess the settlement and subsistence patterns of the sacrificial victims. They identified three major problems faced by researchers interpreting sacrificial remains from the Andes: identification of injury and cause of death, treatment of victims and ritual program prior to sacrifice, and the origin and identity of those victims. It is this final issue that this study will address through the use of stable isotope analysis. The Incan occupation of this site from 1470–1532 CE is unique in that it involves 33 subadults and adult females in with atypical local, regional, and diachronic patterns. In order to better understand these patterns, they hope to address dietary habits and origins of the victims to better interpret their identities. 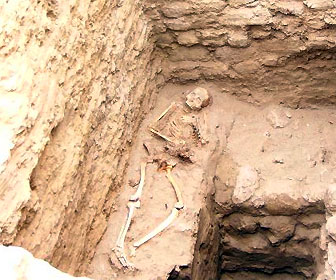 At the site of Chotuna, there were four different events of sacrifice that appear archaeologically, and are from different sub-periods. Human sacrifice in this region is primarily done through deep and repetitive mutilation of the victim’s anterior throat, which is linked to blood sacrifice. In skeletal remains this can be seen through perimortem blunt force cranial trauma, and a variety of post-mortem treatments such as decapitation, disarticulation, defleshing, and ritual display. The individuals were buried in adobe chambers that were part of the pyramid Huaca de los Sacriﬁcios. The chambers were reopened and additional individuals were added over time. The sample consists of 33 individuals excavated from these chambers. Demographic study of the remains found that the sacrificial victims were primarily subadults and adult females. Perimortem trauma consists of injuries produced by throat slitting, chest opening and heart ablation. The analysis of the burials indicates that the bodies were partially decomposed prior to internment. Overall, the sample consists of healthy individuals, with frequent childhood metabolic stress due seen as anemia and enamel defects indicative of a diet rich in cariogenic cultigens. These patterns point to these individuals being of non-elite or common status.

Turner et al. (2013) propose that these sacrificial killings were done as part of a strategy to maintain government control. They occurred during a period of Inca imperial rule over the area, and this involved radical change in organization and direct presence of political figures. The site under investigation would have been an important node of control, and sacrifice may have been a way of reasserting this. They propose that sacrifice victims would therefore be be taken from varying areas in this region as a means of control, but would be given the standard Incan diet upon being taken. Both hair and bone was used to test stable isotope ratios, with bone providing more information about earlier life and hair more recent. Stable isotope analysis of this would therefore be a narrow range of variation for diet based on the ratios of N15 and C13 isotopes, and a wide range of variation for origin based on O18 isotope ratios. Their analysis supported the first hypothesis, finding that they all had a fairly consistent diet in the months leading up to their deaths, primarily based on marine resources. However, analysis of diet based on bone suggests more variation than hair. The O18 ratio data does not support the hypothesis that they were immigrants. The narrow range of ratios suggests a local origin, though they may have been born in another region.

These stable isotope ratio patterns do not match studies that have been done of traditional Inca sacrifices. They conclude that it is less likely due to Incan desire for control, and more likely the continuation of a local tradition. Other studies have shown that the Inca sought to dominate but not assimilate. Therefore, conquered peoples were allowed to continue their own practices under Incan rule. There study adds a new context of sacrifice to the growing knowledge of this practice in the Andes. What is important, it that it shows regional variation of a practice, even when there is a unified government.

Schwartz, 2012. Introduction: Archaeology and Sacrifice. In Sacred killing : the archaeology of sacrifce in the ancient Near East. http://www.academia.edu/2006784/Archaeology_and_Sacrifice

7 responses to “Sacrifice Based On Settlement and Subsistence”