Despite the fact that Sunday was Superbowl XLVII, one of the top trends on twitter Monday was Richard III. Beginning Monday morning at 10am GMT, a press conference at University of Leicester revealed that the bones that were discovered last September in a car parking lot in the British Midlands were indeed those of Richard III. 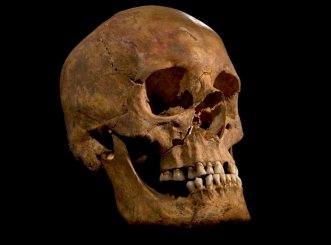 Skull of King Richard III (maybe), via University of Leicester

Richard III was king of England from 1483 to 1485 through a series of potential shady proclamations regarding the marriage of Edward IV and the birthright of Edward V. Supporters of Edward IV rebelled against this accession. This was part of a series of fights between the House of York and House of Lancaster for control of the throne of England, known as the War of the Roses. In 1485, Richard III faced Henry Tudor on the battlefield at Bosworth. It was the final battle in the War of the Rose. During the battle, Richard III was knocked off of his horse, and suffered numerous blows to the head causing his death at age 32.

It was unknown for five centuries what happened to his body. That is until last September when an archaeological excavation in a car park revealed the remains of the Grey Friars church, thought to be his final resting place. Further excitement began when the remains of an adult male with scoliosis and multiple traumas was found in a nearby. The individual was dated from 1455 to 1540, died in his late 20’s or early 30’s and had a more gracile body (consistent with descriptions of Richard). The spine had an unnatural curvature suggesting scoliosis, one of the major defining traits of the late king. The skeleton had ten major wounds that were received around the time of death including 8 to the head suggesting that his helmet was lost. The skull showed that a blade had hacked away the rear of the cranium, a potential cause of death. Given the consistent age, body shape and the battle wounds, Jo Appleby, the osetoarchaeologist on the project, argued that a fairly conclusive case could be made for his identity. Facial reconstruction further added to the case for his identity since it was done without knowledge of who he actually was and with the help of computer modeling to produce an unbiased image. 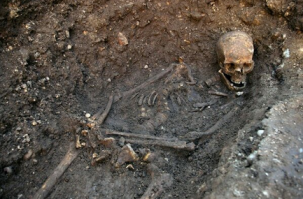 Skeleton of King Richard III (Maybe), via University of Leicester

Monday they announced the results of the DNA testing. Michael Ibsen is a Canadian-born citizen and a direct descendant of Richard III’s eldest sister, Anne of York. It was his DNA that was compared against the possible king. The DNA showed it was in fact a male and was related to Michael Ibsen. Richard Buckley, lead archaeologist on the project, stated that “beyond reasonable doubt the individual exhumed at Grey Friars on September 12th is indeed Richard III, the last Plantagenet king of England“.

Immediately this led to discussion on Twitter and the website that was live-updating on the report. There were questions of the historical significance and whether the hype regarding the identification was necessary. As the day wore on, there were questions over the interpretation and results. One argument is that this will aid in renewing interest into the period and will help combat Shakepeare’s version of the story, which is slightly misleading and portrays Richard III as the only criminal during the war (As one comment notes in a Time article, even the author doesn’t differentiate the play and reality). There is debate over where he should be buried, with the current location set at St Martin’s Cathedral in Leicester, but arguments for a rightful burial in Westminster Abbey or Windsor Castle with other monarchs. 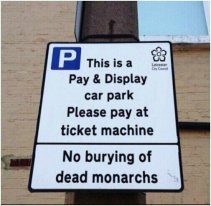 There is also the question of the accuracy of the DNA test. Comparing mtDNA means that there would be similarities between Ibsen and Richard III if their mothers were related. However, the more generations you go back the higher likelihood there may not be direct relatedness. Two people can have the same mtDNA type by chance, it doesn’t always mean common ancestor. The question then is how rare is this type of DNA, and is the test accurate- something we will only find out when they publish the complete academic journal article.

Personally, I’d have to agree with Kristina Killgrove. The evidence appears to stand up to scrutiny, they definitely have a lot of different lines of evidence to back up their arguments, and until we see the final paper we can’t really draw final conclusions. However, until the publication is released, you’ll just have to enjoy the great responses that people are having to this event on Twitter.

And this music video from Horrible Histories.