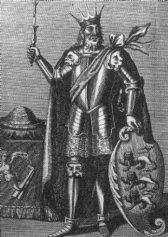 Brian Boru, Irish hero who fought the Vikings, via Wikimedia

Myths and legends of Medieval Ireland describe this era as one of violence and conflict. The tales of Fionn mac Cumhaill and King Arthur describe roaming warbands and battles with mythological creatures. Numerous stories exist for kings and heroes who derive their fame from their ferocity and intelligence in conflict. The bioarchaeological evidence however supports this folklore. That’s not to say that it supports the presence of battles with otherworldly beings, but it does show that there was an increase in violence. Of the 140 cemeteries that have been excavated from this period, 13% of the individuals show sign of weapon related trauma. This doesn’t include the multitude of individuals who may have incurred flesh based wounds, a more likely form of injury. A new study by Geber (2012) examines the anatomical distribution and extent of weapon trauma from two medieval Irish cemeteries.

During the medieval period in Ireland, the political climate was tense, consisting of multiple regional lordships and kingships that were constantly engaged in rivalries and alliances with one another. Records show that there was continual conflict and killing of rulers. The invasion of the Vikings in the 11th century and then the Anglo-Normans in the 12th century, effectively ended this period of intergroup warfare. Portraits of warriors from the early Medieval portray them as classic Celtic fighters. The weapons consist of swords of short sub-Roman type, a spear, small round shields, javelins, pikes, and various axes. Armor and helmets are not recorded, nor are bows and arrows- though both are found archaeologically.

Geber (2012) examines two cemeteries: Mt Gamble and Owenbristy. The sample has a total of 281 individuals from the former and 75 from the latter, both dating to the early medieval period and buried in a Christian manner. Overall, the samples are representative of a demographic population with a normal distribution of age at death and both sexes equally represented. Of this sample 16 individuals show signs of peri-mortem trauma related to weapons. 12 were adult males, 2 were adult females, and 2 were adolescents. The trauma was classified according to the extent of the injury and the area where the injury occurred (ex. left upper limb, torso, right lower limb, skull). 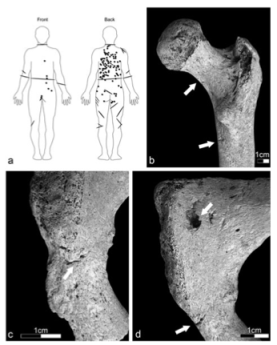 Individual from Owenbristy with 127 wounds, via Geber (2012)

The analysis of the injuries showed that 3% of the Mt Gamble population had trauma and 18% of the Owenbristy population did. Radiocarbon dates on a number of the individuals showed that the trauma did not all occur at one time. For the Mount Gamble population, the neck region had the highest frequency of peri-mortem weapon trauma. Trauma was also frequent on the torso, lower limbs, head and upper limbs. Evidence of decapitation was found in two individuals who sustained a number of other peri-mortem injuries across the body. Two of the individuals were also stabbed in the back.  At the Owenbristy site the neck was still the most prevalent place for peri-mortem trauma, and 7 individuals were found to have been decapitated, including 1 adolescent, both females and 4 males. Trauma was then found frequently on the head, torso and upper limbs. One adult male individual from the site had 127 peri-mortem cutmarks suggesting that they may have been dismembered, including marks suggestive that their genitals were removed.

Geber (2012) notes that the Owenbristy site had a much higher prevalence of violence and in a more excessive way. From the wounds he determines weapons used. The types of weapon trauma identified in these populations differed in several regards and would sug- gest that they were exposed to violence under different circumstances. Chop mark injuries from swords or axes were present in half of the Mount Gamble cases and in all the Owenbristy cases. Stab wounds from knives or spears were present in all of the Mount Gamble skeletons, but only half of the Owenbristy individuals. This may mean that they were dealing with different types of violence, were better protected against one type of weapon, or were dealing with different groups who preferred types of weapons. The removal of body parts from a number of the individuals (suggested by numerous cutmarks around joints or areas like the ear) suggest that trophies were being taken or rituals performed.

It isn’t known why the violence was occurring at these sites, but it was likely related to the intergroup conflict. The violence may have been tactical to resolve a dispute through direct conflict, or strategic to manifest power and draw attention to oneself. Geber (2012) argues that at Owenbristy it was likely strategic or a form of vengeance due to the excessive number of trophies taken and decapitations. This evidence supports the texts that describe this period as one of conflict and violence. Geber’s (2012) study further aids this conclusion by showing that the violence was meant to send a message and representative of continually violence rather than single wars. It is an interesting study, and while further information is needed to understand the manner of the violence (since trophies and vengeance are only inferences that need more evidence) it is a great start to better interpreting the period as a whole.