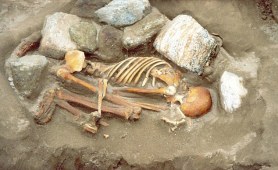 One of the composite skeletons from Cladh Hallan

Manipulation of human skeletal material is not unusual. The deceased may be moved to a new location, or singular pieces can be removed as relics or memorials. However, when we find what appears to be a complete skeleton we make the assumption that it represents a single individual. New research may call this assumption into question. A examination of what appeared to be a single adult male revealed that the bones belonged to a number of individuals rather than one. Hanna et al. (2012) examine the skeleton of a female from the same site in order to determine whether it is one or multiple individuals.

Excavations were conducted at the site of Cladh Hallan, a Bronze Age-Iron Age settlement from the Outer Hebrides, Scotland. Three late Bronze roundhouses were recovered during excavation, and they found the remains of two adults, a sub-adult and an infant underneath these structures. Both adult burials showed unusual indicators of post-mortem manipulation. Portions of the female were recovered in different areas of the house, and her incisors were found with her hands. However, she appeared to represent a single complete skeleton. The male had more obvious manipulation showing potential movement of skeletal elements, and was discovered to be a composite of three different individuals when stable isotope analysis was conducted. Further evidence was found when the mandibular and maxillary dentition failed to match. Because of this conclusion, it was brought into question whether the female was also a composite, even though she showed less evidence of manipulation. Initial analysis of the female skeleton further questioned whether it was a single individual. The skull was definitely female, but the pelvis was not as clear begging the question whether they belonged to different individuals and potentially even different sexed individuals.

One of the composite skeletons from Cladh Hallan

In order to clearly determine whether the female was also a composite, DNA analysis was conducted. Bone samples were taken from the skull, right humerus and right femur and a single molar that had been removed from the mandible. DNA analysis is difficult, therefore precautions were taken to prevent contamination by the archaeologists. The analysis revealed that there were clear differences in DNA between the bony elements. Since each bone revealed different DNA results, this means the skeleton was a composite of at least three individuals.

The question then is what this type of manipulation means. While it is possible that it represents carelessness or misfortune, the authors argue that “the merging of their identities may have been a deliberate act, perhaps designed to amalgamate different ancestries into a single lineage”. This practice is not one that occurs frequently, so it is difficult to draw analogies from other sites. The only examples I can think of are the individuals who remains are used in decoration at sites like the Seldec Ossuary in the Czech Republic or the Capuchini Bone Chapel in Italy. Both sites used the bones of multiple individuals in order to relay a message. A similar practice may be the Catal Hoyuk rite of reopening tombs to remove the skulls, or the creation of bundle burials in Woodland rites throughout the Midwest. Revisiting the dead and the manipulation of bone has long been associated with the creation of ancestors and maintenance of family ties. By moving the bones and changing the arrangement, it is theorized that there is a change in the deceased individual, whether this means that their spirit finally moves on to the afterlife or that their identity is changed from deceased to ancestor.

In order to understand specifically what is occurring in Scotland with these two composite burials, it is going to require a much larger study of the culture as a whole. While it is important to recognize that these are composite individuals, we need to place them within the cultural and historical context if we are to understand what it means as a practice. By comparing these burials against other adult burials we can better understand the purpose of this practice. One important lesson to be learned from this is that a complete skeleton does not always mean a single individual. If it weren’t for the male skeleton being visibly altered and not matching, the female may not have come under scrutiny. We need to be careful both during the excavation to note all manipulation, and in the lab to account for all diversity not just as individual idiosyncrasy but potentially as a sign of multiple individuals.