Excavation is not always a straightforward process of removing soil in specific cultural and natural layers. It needs to be done carefully to note all inclusions and levels. As I discussed in my post about archaeothanatology, if we do the work in a systematic way that pays attention to the way that the soil has been changed, we can infer new details about the process of burial. A new study by Karkanas et al. (2012), takes a geoarchaeology approach towards excavation in order to create more nuanced interpretations of the use and reuse of Mycenaean chamber tombs. They argue that this approach will “provide details about the process of backfilling and reopening of the tombs and to identify the location, number, and slope of these re-openings”. By reconstructing the complex processes occurring in conjunction with mortuary sites they can better understand the social meanings behind it.

From 1400 to 1060 BCE, chamber tombs are recovered from across the Aegean region. They were used by both commoners and second-level elites. These tombs consist of three major elements: a chamber, a chamber entrance and the entrance corridor. They are traditionally found on hillsides, with the corridor sloping downwards to the chamber. The tombs usually contain more than one burial, and have a number of grave and funerary goods. By combining knowledge of the tomb, skeleton and grave goods, researchers have been able to form relatively good conclusions about social structure. However, there are still questions about the funerary processes that are potentially revealing. We do not yet understand the episodes of mortuary activity such as the funerary and body preparation, the deposition of grave goods and remains, the various funerary rites at burial, and memorial rites. It is known that chamber tombs were reopened for memorial services and burial of more individuals, but it is unknown how this process correlates with what is found within the tombs.

Karkanas et al. (2012) use macro- and micro-stratigraphy in order to create better interpretations regarding the opening and reopening of chamber tombs. They applied this methodology to 6 Mycenaean tombs, five of which were located in the Ayia Sotira cemetery, and one at Barnavos. All of these are associated with the ancient village of Nemea, and are argued to be the burials of the community that inhabited the hill of Tsoungiz.The goal of the work was to create a model of site formation processes to interpret episodes of mortuary activity. Only three of the six tombs were found undisturbed, the other half had been looted to some extent. 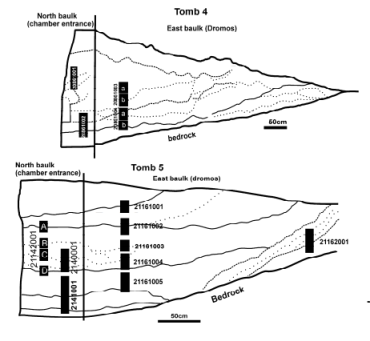 The method requires understanding the number of episodes of reopening which requires careful attention to the stratigraphic layers, both the natural mixing of soils that occurs with backfilling and the inclusion of cultural material while the tomb is open. With each episode of refilling there should be soil deposited from earlier episodes in sloped lenses. Normal excavation of the chamber tombs consists of horizontal removal of entire layers of soil. However, since the soil will be of similar composition due to episodes of refilling, they excavated sections to different levels and left a single portion of the floor untouched along the edge and middle to preserve the stratigraphy. They sampled a variety of lenses within the strata to determine whether these represented individual episodes of refilling. They found sloping that was evidence of backfilling, the positions of burials revealed different levels of soil, and they found remnants of different layers of constructed floors. While they weren’t able to correlate specific episodes of burial with grave goods or layers of soil, they were able to document the process of reopening and backfilling.

Understanding the process of funeral and memorial is an important aspect of mortuary archaeology that is often forgotten. Burials are often revisited, whether this entails the opening of the tomb for the inclusion of other individuals or the placement of new grave goods in memory of the deceased. We need to be able to separate grave goods at death with those for memorial in order to better understand social processes that are occurring. By taking a different approach to excavation and leaving the edge of the chamber untouched, they were able to understand the episodes and nature of the reopening and refilling processes at the chamber tombs. While this information did not directly correlate to social processes, it is a first step in developing a more nuanced approach towards excavation that can be potentially revealing at a number of mortuary sites.

4 responses to “A New Way to Excavate Chamber Tombs”