During the 18th and 19th centuries there are many well documented cases of scurvy in historical records, however paleopathological evidence for disease in Britain has not found the correlating skeletal evidence. This lack of skeletal evidence is thought to be due primarily to misunderstanding and misdiagnosis of the skeletal lesions relating to the disease, especially in cases where the research was done over thirty years ago. It is only recently that extensive investigations of the manifestation of scurvy on skeletal remains have been conducted, and it is still not fully understood. Understanding nutritional diseases in the past is important for creating better interpretations of what life was like, as well as noting the impact of historical events on health. A new study by Geber and Murphy (2012) examines the rates of scurvy in a population from the Great Famine. 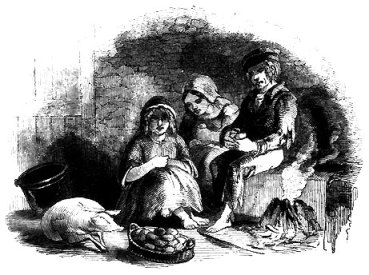 Scurvy is caused by a lack of vitamin C in one’s nutrition. Potatoes are rich in vitamin C, almost comparable to citrus fruits. When the potato blight and famine struck, the poorest members of society lost their access to the tuber and suffered nutritionally. Historical accounts of the disease are first recorded in 1845, noting the presence of rosy patches of skin, swollen muscles and aching bones. It also includes gingivitis, tooth loss, swelling of the lower extremities, vertigo, faintness, profuse sweating, hemorrhagic spots in the eyes, and impaired healing of wounds. In the skeleton, the swelling in the joints and limbs causes porotic and hypertrophic bone formation at the affected areas. Fractures can also occur. Since vitamin C is required for bone formation, the skeletal lesions only become apparent if there is healing. As Geber and Sullivan (2012) note “this is an important factor to consider when interpreting its prevalence in skeletal populations since individuals with no osseous lesions may have been severe sufferers who died before any scorbutic lesions had manifested”.

Due to economic constraints during the mid-19th century, the diet of the poor in Ireland was drastically reduced to primarily potatoes and dairy products. While buttermilk and potatoes can provide the majority of vitamins and protein necessary, it is estimated that one third of the poor population would have been forced to subsist on potatoes for periods of time. With the potato blight in 1845 there was increasing pauperism. People affected by the blight were forced to take shelter at workhouses like the one at Kilkenny City, and during the famine there was major overcrowding leading to disease and mass death. In order to deal with the high number of deaths, mass graves were created within the workhouses and intentionally concealed after the famine ended. The location was never marked on a map, so the discovery of the mass graves at the Kilkenny Workhouse was a complete surprise. 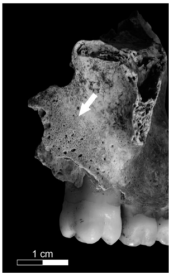 Porosity on the maxilla, Geber and Sullivan 2012

In 2005, excavations were conducted of a previously unknown mass burial ground that dates to the Great Famine (1845–1852). It was found on the grounds of a former union workhouse in Kilkenny City, Ireland. The excavation revealed 63 mass graves where the deceased were simply stacked upon one another. 970 individuals were recovered and examined macroscopically for lesions. They primarily looked for porosity in the jaw caused by the dental problems associated with scurvy. They also recorded new bone formation in the long bones. Diagnosis was labeled as definite, probable or possible. A definite diagnosis of scurvy was made in 16% (156) of individuals, while probable scurvy was identified in 14% (138) of the group, and possible scurvy was considered to be present in 21% (205), an overall prevalence of 52%.

Other populations from this time period and area usually show prevalence of 3 to 7%, which means that the population at the Kilkenny Workhouse had unusually high rates of scurvy. They argue that since the lesions from scurvy “only appear after a re-introduction of Vitamin C, the skeletons with signs of scurvy in the Kilkenny Union Workhouse population are therefore likely to have been individuals who had been deprived of Vitamin C as a result of the potato blight, but were then provided with the vitamin in the work- house diet once they had been admitted to the institution”. These findings are important because they are the first well documented evidence of scurvy in a famine population. It further supports their argument that the reason vitamin deficiencies are not seen in the Great Famine is due to misrecognition rather than a lack of the presence of the disease.

9 responses to “Scurvy During the Irish Famine”