“All I desire for my own burial is not to be buried alive.” – Lord Chesterfield, 1769 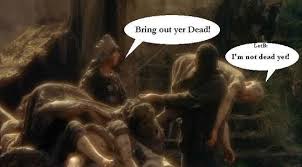 The fear of being buried alive is more than just a Victorian era pre-occupation. Premature burial, also known as vivisepulture, has been recorded as intentional as a form of torture or murder, or accidental due to death like states such as catalepsy or coma combined with the inability to determine complete death. During the Victorian era, there was such a preoccupation with preventing this fate that the anxieties living burial became a major source of literary inspiration. In the works of Edgar Allen Poe it was a repeated fear found in his stories “Berenice”, “The Cask of Amontillado”, “The Fall of the House of Usher”, and was featured in his tale “The Premature Burial”.

“I violently threw up my arms, which had been lying at length, with the wrists crossed. They struck a solid wooden substance, which extended above my person at an elevation of not more than six inches from my face. I could no longer doubt that I reposed within a coffin at last… I writhed, and made spasmodic exertions to force open the lid: it would not move. I felt my wrists for the bell-rope: it was not to be found… and then, too, there came suddenly to my nostrils the strong peculiar odor of moist earth. The conclusion was irresistible… they who had buried me as a dog — nailed up in some common coffin — and thrust deep, deep, and for ever, into some ordinary and nameless grave.” From “The Premature Grave” by E.G. Poe.

Newspapers from the 19th century report on a number of cases where individuals were prematurely buried. From an 1877 British Medical Journal comes a report of a woman being declared dead and interred as normal fashion would have it. Three days later, when the crypt she was placed in was reopened to receive another body she was discovered in quite a different state than that of her burial. It was recorded that “the clothes which covered the unfortunate woman were torn to pieces, and that she had even broken her limbs in attempting to extricate herself from the living tomb.” The article continues that the doctor who signed the death warrant received three months in jail for involuntary manslaughter. Other cases from this period include a report from 1886 Woodstock, Ontario where a girl was exhumed after a number of weeks to be moved to another burial location. Her body was found with her legs tucked up under her, the shroud torn to pieces and a look of horror on her face. A young man in North Carolina was found to be buried alive in 1885. When the body was removed from the casket a week after his funeral, it was found that he had moved face down and scratches covered every surface. This report was so widespread that even the New York Times reported on it.

The fear of being buried alive led to the creation of a number of interesting artifacts. A number of safety coffins were patented during the 18th and 19th century to prevent premature burial. These range from attachments like bells (from which the phrase saved by the bell comes from), ladders for escaping, and horns for alerting people of your presence. Some of the wealthier ones including poisonous gas bottles which could be broken to allow for a swifter death. There are no actual reports of these coffins saving anyone’s life.

This fear continues even today with reports of an older woman in 1994 being declared dead and placed in a body bag, which is where EMTs found her struggling to escape from over an hour later. In 1993, a man in South Africa spent two days in a mortuary tomb before workers were alerted to his presence and were able to rescue him. In 2011, another man in South Africa found himself waking up within a coffin at the morgue. You can see a video of the man’s interview here. This fear has led to continuing advancements in the creation of safety coffins. In 1995 a modern one was created containing heart rate and movement monitors. More recently, a Turkish morgue has put internal door openers onto all of the caskets in the morgue in order to prevent someone being locked in one alive.

So why would a mortuary archaeologist have any interest in premature burial. First off, it does occur and it is important that we are aware of this in making our interpretations of burials and graves. Second, there are a number of mortuary related artifacts which may appear to have non-mortuary use unless you are aware of this preoccupation with living burial during the Victorian period. The bells and horns which were used in graveyards simply look like a variation on normal horns and bells. Third, the fear of being buried alive can lead to a rise in certain form of burial like cremation. Michael Parker Pearson argued that the rise of cremation in the 19th century in Britain was due to this fear. Having a knowledge of fears behind death can aid immensely with interpreting the rituals behind death.

Archaeologists do uncover potential premature burials. The skeletal remains of a 15 year old girl was excavated in 2009. Her remains were found in China and are at least 1,500 years old. Given the state the body was found in (the details of which are not given) and the practice during that period of living burial of servants, the archaeological team argues she was likely buried while still alive. More recently, archaeologists uncovered the potential remains of Saint Chrysanthus and Daria who were reported to have been buried alive. Both individuals were Romans who converted to Christianity, which in the 3rd century CE would have resulted in the punishment of death. According to legend, the pair was buried alive in Rome. When the skeletons of a young man and young woman were found buried in a cathedral in an unorthodox location dating to the Roman Empire, it was argued that they were the remains of the buried alive saints.

3 responses to “I’m Not Dead Yet: Premature Burial”