Continuing on the theme of mass burials, those from plagues often carry the assumption that the population interred within are a ‘snapshot’ of the population, an unbiased representation of who was alive and the ‘healthy’ condition of who they were. Wood et al. 1992 even argued that this phenomenom represents one of the only unbiased views of a deceased population. The East Smithfield Plague burials from London’s demographic profile is seen as reflective of the living one, “suggesting that there was an indiscriminate cross section of the population who died during the Black Death” (MOL 2010). However, recent research shows that this might not be accurate.

DeWitte and Wood (2010) found that the bubonic plague, specifically the one from the 1347 to 1351, was actually selective in its choice of victims. Instead of taking any life, irrespective of frailty, the plague’s virulence was dependent upon the health of the individual. The frail and sick were more susceptible to the virus. This conclusion was determined from the analysis of 490 skeletons from London, East Smithfield Collection, and 291 from Denmark, Viborg and Odense Collections. They found that pathology among the plague dead was extremely high, and that pre-existing frailty is likely the reason for susceptibility. The conclusion from the extended study of pathology is that “despite the obvious virulence of the Black Death, we should not be surprised that it did not affect all individuals equally. As a consequence, cemeteries associated with the Black Death cannot be expected to provide a perfect, easy-to-interpret cross-section of the living population
immediately before the outbreak” (DeWitte and Wood 2008:1439). 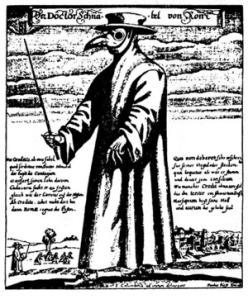 Their argument supports what common sense would seem to dictate- the weak and the ill would be the most likely to fall to the disease given that the healthy have the opportunity to escape. There are other issues with our assumption of plague burials as representative of the living. We must consider if young males are absent due to warfare, and whether certain groups have left or migrated due to the plague. This realization by DeWitte and Wood, however, should not have caught academia by surprise, and the only suprise could come from that fact that this was not addressed earlier. In 1997 a gene was discovered in 10% of British descendants that creates an immunity to the bubonic plague, and also AIDS (Radetsky 1997). This alone should have made us re-examine our viewpoint on plague burials. Perhaps what we need to re-examine at the moment is our overall viewpoint on health. If the sick and frail were more susceptible to plague, and 30 to 50% of the population in Britain died from plague, then logically the health of that percent was extremely poor. It is from this that our future research should extend, if overall health was that poor we can interpret standards of living and domestic life better.

So what do we take away from this new research by DeWitte and Wood. First, the osteological paradox continues to be pervasive in everything we do, and we must always examine our data fully before taking anything for granted. Second, we need to start reading the news and taking a more multidisciplinary view towards our research.

DeWitte and Wood, 2008.”Selectivity of Black Death mortality with respect to preexisting health”. In PNAS, v. 105 (5)

One response to “Black Death- Not a Snapshot of a Population”